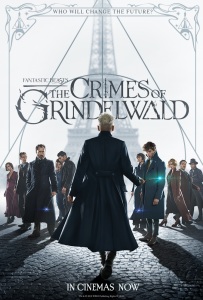 Directed by David Yates (Harry Potter and the Half-Blood Prince, Fantastic Beasts and Where to Find Them)

Written and Produced by J.K. Rowling (Fantastic Beasts and Where to Find Them)

Cinematography by Philippe Rousselot (Big Fish, Fantastic Beasts and Where to Find Them)

A year after the happenings of Fantastic Beasts and Where to Find Them, the evil wizard Gellert Grindelwald pulls off a daring escape while being transferred from the Magical Congress of the United States of America (aka, the American Ministry of Magic) to the British Ministry of Magic to answer for his crimes, and Grindelwald sets out to gather followers unto himself, seducing them with his “we are special” philosophy. Three months later, a chain of events set off by a multi-party search for the obscurial Creedence Barebone, thought dead but discovered alive, bring to Paris a multitude of characters from the corners of the Wizarding World. Meanwhile, a prophecy in poetry looms over the head of each and every witch and wizard, as do divinations of a coming darkness, and each person is racing to either stop the prophecy or fulfill it.

Fantastic Beasts: The Crimes of Grindelwald, the second installment (out of how many we’re not one-hundred percent sure yet, supposedly five) in J.K. Rowling’s Fantastic Beasts film series is fine, not bad but not great either. I liked it overall better than the first, as it feels somewhat more focused, though Fantastic Beasts and Where to Find Them had several elements in it that were better. I am still looking forward to the next chapter.

Most of my problems with the movie can be blamed on one person, I believe: J.K. Rowling. Rein her in a bit, give her a writing partner or something of the like, and these movies could be good.

This particular movie could have been great. As usual, Rowling has spun an entrancing tale here. The generality of the plot is engrossing, with many intriguing ideas and a fascinating set of characters.

Newt Scamander (Redmayne) is a pacifist-leaning, troubled, caring, understanding, “mid-head” (as he calls someone else) wizard, who tries to see the good in everyone and everything, who tries to understand all sides, and who realizes that almost every conflict is simply flawed people versus flawed people, a wise man in many ways, but he finds he actually must choose a side eventually, no matter how hard he tries. In Jacob Kowalski (Fogler), we see a non-magical person, a Muggle, who desires to hunt down and win back the love of the witch for which he has fallen, despite how she has tried to manipulate his feelings toward her. Tina Goldstein (Waterston), an Auror law-enforcement officer from America’s Ministry of Magic, is a witch who knows that everyone is after a certain disturbed but powerful boy, whom she has been trying for years to save but hasn’t been able to save successfully, and she is desperate to save him now, even if it means her life and the creation of shady alliances, because she has seen first-hand the environment from which this boy comes and the catalysts that drive him down his current path. Tina’s sister, Queenie (Sudol), is a witch who is also a mind-reader, and who has trouble with boundaries, including her own; she loves a “no-maj,” Jacob, and is grieved at a society that will not allow her to marry him, and so she is primed to be seduced by a doctrine of “free love,” even though the one proclaiming this doctrine wishes to push any non-magical person to the dirt, to make them a “beast of burden.” Yusuf Kama (Nadylam) swore a blood oath, which cannot be broken, to his dying father that he would enact revenge upon the family that ripped apart his family, and now he is bound to carry out this vengeance whether he wishes it or not, whether it will be a good decision for the coming war or not. Leta Lestrange (Kravitz), who was once in love with Newt and perhaps still is, accidentally helps dig back up a part of her tragic past, which is coming back to haunt more than her in a terrible fashion. Credence (Miller) is the powerful and dangerous young man for whom everyone is searching, racing to either save or convert, but he is just looking for the truth of his past, or, really, any shred of evidence concerning his past he can find. Grindelwald (Depp) is largely the agitator of the occurrences about to culminate in all-out war, and he has begun drawing many to his side with a philosophy that seems part xenophobia, part “rightful” classism, part Ayn Rand, and part hippy cult. Dumbledore (Law), the most powerful wizard alive, is powerless to intervene in all of this, due to a blood oath he and Grindelwald swore together as young men, when they were the closest of friends.

Engaging stuff, right? Well, it would be if it weren’t all stuffed so hastily into a screenplay that is absolutely bursting at the seams and doesn’t have time to spend time with its characters. With all the plot going on, the movie has to sprint from one point to the next, never letting the events, locations, characters, or themes breathe and sit with us for a second. And the characters I mentioned and the ideas and themes associated with them aren’t even the only characters, ideas, and themes vying for screen time here, as Rowling seems to feel the need to fill this cup to the brim with Wizarding World facts and lore, piling them on top of everything else, with little regard to the plot’s flow. The movie is paced poorly and features an oddly misshapen structure.

J.K. Rowling writes good novels, but a good novelist does not a decent screenwriter make. This has been proven often, and it’s proven again here. Rowling has an enormous amount of creative control over this Fantastic Beasts series, but, as with the first one, the second episode has way too much going on. She needs a writing partner, or some such person, to help her trim down her good ideas into a good screenplay, and she needs producers and directors willing to tell her what will and will not work, to make a better movie happen. Rowling plus great collaborators could equal a magnificent fantasy picture, as it did with many of the Harry Potter films, but I think Rowling plus yes-men has given us the Fantastic Beasts series so far.

In addition, Rowling has here succumbed to prequel-itis. Prequels are difficult, because, to be successful, they must tell their own interesting story while setting things up that happen in a different story and also making sure they don’t introduce plot holes, contradictions, etc. In film history, many prequels have been made but very few have been truly successful at storytelling. I won’t say The Crimes of Grindelwald is a bad sequel, and this series still has time to become great, but Fantastic Beasts 2 does introduce several gaping plot holes and surprising contradictions, both for its own plot and for the Wizarding World as a whole, as well as some curious retcons. Even so, let’s wait until the series is complete to throw stones. Let’s give Rowling and the producers a chance.

I do not blame Rowling for every single problem I have with this movie. The editing is sometimes choppy and uneven, the action is often choreographed confusingly and without establishments of space, and the film is yet another victim of this current trend of murky photography. Solo had it earlier this year; so did The Nun. I can’t stand it. One could say it’s because director David Yates loves dark cinematography, but that worked much better from him in the last four Harry Potter films, where he and his cinematographers used darkness effectually, and they filled it with many vibrant colors. You can’t blame this on the cinematographer, Philippe Rousselot, being inexperienced either, as Rousselot has done some superb work in the past.

I do, in the end, still recommend The Crimes of Grindelwald. The wide-ranging cast performs excellently (though I still wish Colin Farrell were playing Grindelwald instead of the distracting Johnny Depp), even when given sub-par material; the characters are good, despite being in the midst of a confounding script; the effects are, for the most part, solid; James Newton Howard’s score rings out pleasantly; and I did enjoy some of the extra world-building and lore. Plus, Newt and Tina are stronger characters now than they were in Fantastic Beasts and Where to Find Them, and the fantastic beasts have more to do with primary story plot points and developments than they did with the first’s, where they were influential but only in a story of their own, aside.

To summarize, I love Fantastic Beasts: The Crimes of Grindelwald’s tale, but I dislike the way in which it’s being told.

I’m going to give Fantastic Beasts: The Crimes of Grindelwald a 62%.

4 thoughts on “Movie Review – Fantastic Beasts: The Crimes of Grindelwald”