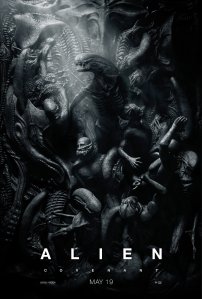 Directed and Produced by Ridley Scott (Alien, Prometheus, and a bunch of other really good movies!)

Screenplay by John Logan (Gladiator, Skyfall) and Dante Harper (The Delicate Art of the Rifle)

Cinematography Dariusz Wolski (Pirates of the Caribbean, The Martian)

Music by Jed Kurzel (The Babadook, Slow West), with Alien and Prometheus themes composed by Jerry Goldsmith and Marc Streitenfeld

Alright, show of hands, how many of you love the Alien series? Yeah, both of our hands are raised. We just can’t get enough of the Alien universe, and we were eagerly awaiting the latest installment: Alien: Covenant. Can we see too many people getting munched by acid-bleeding, killer-tongue xenomorphs?

No! The answer is no.

Basically, this story picks up ten years after Prometheus. Humans are trying to find other habitable planets in hopes of saving the human race. A small crew, with the aid of a synthetic named Walter (Fassbender), is shuttling towards the planet Origai-6 aboard The Covenant, in hopes of finding a suitable home. Accompanied by the crew are two thousand-some colonists, along with thousands of human embryos. While the crew is still in cryogenic sleep and still roughly seven years from their destination, a neutrino blast damages the ship, killing a few of the colonists and the ship’s captain, Branson (James Franco). As second-in-command, Oram (Crudup) takes over as captain. He isn’t sure of himself since he knows, despite his qualifications, he was not originally selected as the ship’s captain. He thinks this is because he is a man of faith, and he feels that the crew does not trust him. Oram had better get a grip, because things aren’t going to get any better.

While repairing the ship, Tennessee (McBride) receives a strange, convoluted transmission. Once the crew determines the transmission’s origin, and despite strong misgivings by the new second-in-command, Daniels “Danny” Branson (Waterston), Oram decides to chart a course to the transmission’s location. Upon arrival, everything seems okay. There’s even wheat, which suggests to the crew that human existence is possible, if not probable, on this planet.

Remember when we said things aren’t going to get any better? Well, shortly after landing, the trip takes a sudden turn south when two of the crew members become inadvertently infected by alien spores. . .

And that’s where we’ll end the narrative so we can prevent any spoilers!

So, yeah, if you’ve seen Prometheus and Alien, then you get the general idea of how things are going to turn out!

As for the visuals, they are beautiful. Ridley Scott always crafts gorgeous and bold. Alien: Covenant is no exception. Scott and his DP get some breathtakingly beautiful shots here, implementing both in-camera effects and CGI effectively, along with beautifully ominous scenery, huge sets, and good lighting. Without a doubt, much care and handling goes into the creation of Scott’s movies. Scott is a master class director who knows when to implement practical effects and when to use CGI. He builds enormous sets and collaborates with fantastic FX gurus to build his worlds and tell us his stories. That’s all on full display once again here, with many memorable visual moments.

The shots of space were crystal clear, and the aerial and ground-level views of the alien planet – represented by dark and mysterious Australian mountains – were dark but detailed. The dank metal-and-shadow interiors look foreboding. We see the giant, epic, and ancient, as well as the claustrophobic, confined, and futuristic. And all the designs that pay tribute to the wonderful and weird H.R. Giger’s influential work on Alien are appropriately amazing. There’s also a return to cool and gory but restrained body horror that really works.

In the CGI department, the film delivers tremendously. The neomorphs were done well – freakish, albino-looking xenomorph predecessors equipped with shorter teeth and sunken cheeks but the same agility as xenomorphs. They were worthy adversaries for the crew and were chillingly creepy. The CGI kudos don’t stop there. The xenomorphs in this film justifiably resemble the originals and are awesome as ever. To say the least, special effects have gotten better over the last 40 years, and Ridley Scott used the tools available to show us what H.R. Giger’s xenomorph could have looked like in the original film. Occasionally, some of the CGI has a little too much sheen and seems out of place, but it’s excellent overall.

One concern going into this movie was that it would be too much of an Alien clone. The trailers certainly gave us that impression. Thank goodness that’s not the case. What Scott created here comes across as a blend of Alien‘s horror, Aliens‘ sci-fi action, and Prometheus‘ philosophical ponderings. The film attempts to converge all three of those tones and be it’s own film, a sequel to Prometheus, and a prequel to Alien. A tall order that Scott handles deftly, resulting in as successful a venture as possible. Some people have cited Covenant‘s various tones as an issue, saying they conflict too much, but we feel that Scott kept everything straight.

The story is pretty good too, tense and engaging from beginning to end. It adheres to and enhances Alien lore and – sometimes satisfyingly, sometimes not – answers questions raised in Prometheus. Demystifying movie mystery often becomes counter productive, but this story, coupled with Prometheus, gives us a lot to chew on and does the originals justice. Some of the story elements that Scott and his writers present are bold, fascinating, and thought-provoking. Also, a warning, it’s not the action filled sci-fi the trailers have been making it out to be, opting for the more slowly, intensely measured, and plotted out route. Yet we felt engaged in the story from beginning to end, despite the fact that it takes around half an hour for the action to start.

The acting is top notch. Fassbender, of course, is a masterful thespian, one of the best and most underrated of our time. He proves that again in this movie, and he does tend to overshadow the other cast members. However, they all put in solid work. Especially Waterston and McBride, both of whom impressed me. Waterston honestly did some bland work in Fantastic Beasts, and McBride is usually an annoying douche-bag. But here, they are perfect for what’s at hand.

And now we get to the script. Yes, the story is fascinating, the questions raised interesting, and the horror effective, but some of the script’s minor details are annoying and our main frustration with Alien: Covenant. Unfortunately, Scott and his writers lazily adhere to many horror tropes just to move the plot forward. Or maybe they wanted to add in some wry humor. Either way, it is kind of distracting. And the climax is cluttered up a bit by “Oh, so we’re going this route, huh?” type stuff. You can see almost all of the surprises and deaths coming, and that seems to be the script’s fault, because each surprise or twist is poorly telegraphed. In addition, the stupid horror movie cliche decisions of many characters (despite their positions and supposed knowledge and skill, and despite the fact that the characters are actually pretty decent) and spots of laughably cringey dialogue doesn’t help that. Notwithstanding the script’s annoying pieces, we do have to give it credit for working with the story to give us many great moments, and the inferior parts aren’t enough to block our enjoyment of the movie. On top of that, the characters themselves actually turned out better than we thought they would.

For other comments, Scott’s movies often get cut up disapointingly, whether he has a part in this or not. His director’s cuts are often far better than the theatrical releases. For whatever reason, this seems to happen time and time again. Blade Runner, Kingdom of Heaven, and Robin Hood come immediately to mind. The scenes left out of his theatrical cuts often make a difference in bettering the movie. Nevertheless, this time was different. There are two scenes, and maybe a few other moments, that should have been removed altogether because they threw off the film’s pacing and just weren’t contributive. Also in the editing department, there’s one very odd sudden jump that seemed like an editing mistake. But we have a positive comment to put here as well, and that is that Jed Kurzel did a good job with the music, bringing together Jerry Goldsmith’s original score, Marc Streitenfeld’s work on Prometheus, and some of his own stuff as well.

If you are a fan of deep space horror and science fiction in general, seriously, go see this movie. It is not making the money it deserves. Don’t go see Baywatch. Don’t go see Guardians for the fourth time. Don’t go see Wonder Woman for the fifth time. If you haven’t seen them already, you can wait on Pirates 5 and The Mummy. Go see Alien: Covenant. No, it’s not perfect, but it’s good, and we get too few good, deep space horror films. We also really want to see how the story continues, which we won’t if the movie doesn’t make enough money. This is a gorgeous, thought-provoking, scary sci-fi film, worthy of its place in the Alien canon, and the best Alien franchise installment since Aliens.

P.S.: If you haven’t watched Alien or Prometheus, watch at least those two entries in the Alien franchise before this one. If you don’t, you might get a bit lost, though you’ll still probably enjoy it.