Herein lie five 2017 rock records I listened to in 2017 but we here at E.D. regrettably missed talking about in 2017. Enjoy, and if you have any thoughts, leave them in the comments section!

Grunge is not a genre that I wish to see revived. I like some of the material that came out of that movement, and I certainly enjoy a few of the bands – like Alice in Chains and Soundgarden. Still, it was a genre that allowed a lot of . . . crap . . . and a genre that, unfortunately, had as many negative effects on rock and metal as it did positive effects.

Look, I know I could catch some for that statement, and, yes, all genres have bad acts. Yet I dislike most of the grunge stuff. That being said, if grunge were to experience a revival, I wouldn’t mind it if this new band Underwing, hailing from Norway, were at the forefront! They haven’t even released a full LP at this point, and they’re already making underground waves.

The difference in Underwing is the band’s instrumental ability and composition. I read somewhere that these guys call themselves “progressive grunge,” which, after listening to their music, is accurate. The wailing yet gruff vocals and rhythm strings section have a distinct grungey flavor, but the songs’ compositions, the skill and tightness of the band’s rhythm and timing, and the guitar solos bring to Underwing’s sound a prog technicality. Also unique, Underwing implements instrumentation that contrasts heavy, forward-driving, complex drumming with meaty, weighty guitars and an always-solid bass foundation that represents both sides. These two energies seem too opposite to work well, but they’re held together with remarkable skill. The guitars even have a bit of a bluesy metal, Black Sabbath vibe, which works well.

Kaela Upsweep is a groovy, melodic, and, overall, pretty great EP to introduce Underwing to the world, and I’ll definitely be looking forward to an LP, hopefully to come in the near future. I liked all five of the songs here! 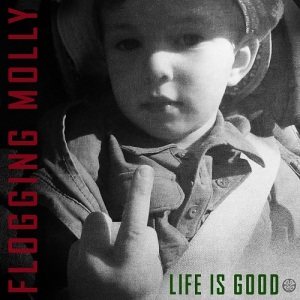 Purchase Life Is Good via Amazon

Flogging Molly is an interesting band, a strange brew, a concoction of traditional Irish music, punk rock, hard rock, and bluegrass, managing to respect each of these genres and do them all reasonable justice. Their new 2017 release here certainly sticks to their strengths, but it does sound a bit safe sometimes, which is kind of disappointing, considering we had to wait six years for it, six years since their smash hit Speed of Darkness. Still, there are a few great tunes here, like the Irish pub anthem style “The Hand of John L. Sullivan,” the insightful “Welcome to Adamstown,” and the war ballad style “The Guns of Jericho.”

Maybe it’s not as safe as I think. The amount of upbeat optimism the guys bring to this record is somewhat unusual for them, and there was always a chance their fan-base would have responded poorly, or at least with a “meh.” And the way Flogging Molly performs the track listing makes you, as the listener, really feel like an audience member, makes you feel like you’re at a pub, and there they are, playing in the corner, belting out each lyric as if to you, as if to each person in the room. They bring that feeling effectively. The couple of almost anti-Christian (not completely anti-Christian, I don’t think) sounding lyrics did throw me off slightly, though.

It’s kind of funny, or ironic, that both Flogging Molly and Dropkick Murphys came out with an album this year. I like Dropkick Murphys’ a little more, but Flogging Molly’s is certainly more confidently put together, or at least it is more consistent. King’s lyricism is deft with much thought behind it, and the band’s compositions do a great job mixing the sounds of their influences, and the band performs those compositions excellently.

If you’re looking for 2017’s best radio-ready hard rock, Hydrograd is one of the first releases I’d mention to you. It’s aggressive but fun, energetic, and well-made. The album won Hard Rock Album of the Year at the 2017 Loudwire Music Awards, and though I may disagree with the choice of album to award, congratulations to Corey Taylor, as much of an idiot as he might be when reporters irresponsibly stick a mic in his face.

After Taylor had gone especially grim for three albums straight (two Stone Sour albums and one Slipknot album), he wanted to lighten things up, understandably, and that’s what he did on Hydrograd, Stone Sour’s sixth studio album and their followup to the overly self-serious House of Gold and Bones, Parts 1 and 2. These songs here on Hydrograd are radio-ready yet still quality, catchy, metal-tinged rock tunes. The tracks are also more rock ‘n’ roll and groovy than some of the previous Stone Sour material. With this in mind, it’s probably good that Stone Sour chose Jay Ruston as their producer this time around, since he’s successfully completed such balancing acts before. Ruston is a long-time Steel Panther producer, including work on their 2017 album, and he produced Anthrax’s two latest studio albums.

This album’s a heckuva lotta fun, despite some silly lyrics and moments, and despite some unforgivable dad puns in the track titles, like “Taipei Person/Allah Tea,” “Fabuless,” and “Friday Knights.” The album is also capped off by the surprisingly mature “When the Fever Broke.”

Corey Taylor’s bands, back in the day, were some of my first introductions to heavy music, and I still remember that. I had stepped off the Stone Sour train a while ago, but with the kind of music they’re making here, I might just step back on. 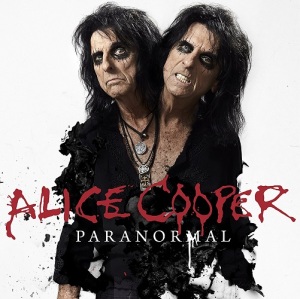 Forty-five years before Ghost BC was making theatrical, carefully-crafted shock rock and metal that appeals to many people, despite often featuring shocking lyrical content, by having a good handle on several genres and subgenres and melding that knowledge, Vincent Damon Furnier was doing that very thing. Like Ghost, Furnier is an entertainer extraordinaire, a master of both horror and comedy. He’s always been a student of the macabre, of vaudeville, and of rock ‘n’ roll, and over five decades he has brought his learning with him. Though he may not have always maintained his grip on producing exceptional records, he has maintained his unique, raspy voice and his ability to entertain through the character of Alice Cooper.

Cooper’s sound has seen a few evolutions over the years, and Paranormal is the latest, though perhaps it is a combination of some of what he thinks (probably rightly so) are his best previous sounds. Right off the bat, you must understand that Paranormal is not a metal album. It is a rock album and one of many flavors. I found these flavors delicious, but you may dislike it if you do not. The greatest weakness here is the inconsistent quality of the songs and unfocused tones. However, several of the tunes worked for me, and I enjoyed the overall album quite a bit. Cooper doesn’t hit anyone over the head with his Christianity, but I do like that this album shows he is not hesitant to implement Christian imagery into his songs, as seen on “Holy Water.”

Paranormal is not the best thing Cooper’s ever done, but it’s not the worst either. It is, however, probably Cooper’s best album in many years. And it’s a good introduction to Alice Cooper’s music, if you’re not familiar with it beyond the ever-famous “School’s Out.” 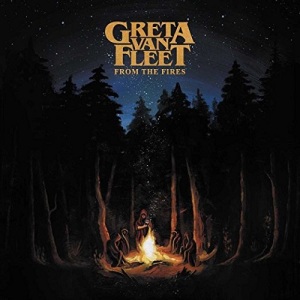 Purchase From The Fires via Amazon

What would you get if you combined the hard rock, psychedelic rock, and folk rock of such past bands as the Rolling Stones, Led Zeppelin, Cream, The Who, Aerosmith, and Heart, then you injected that concoction into a young band full of youthful energy and hunger? You’d get brand new band Greta Van Fleet with their second EP, From the Fires, which is a double EP, combining the four songs of their first ever release, the Black Smoke Rising EP, with four new songs. The eight songs consist of six originals and two covers, one of them of Sam Cooke’s 1964 “A Change is Gonna Come,” one Fairport Convention’s “Meet on the Ledge,” both of the covers excellent.

In the vein of such retro groups as Wolfmother and The Struts, Greta Van Fleet are trying to put a fresh face on the rock ‘n’ roll of the ’60s and ’70s. Uproxx.com has called these guys “Led Zeppelin for Generation Z.” In many ways, Greta Van Fleet are proving themselves successful at this, or, at least, they have the beginnings of success. Already, they are hammering out an identity unique to the current rock scene, even if that identity is composed of, more or less, reused sounds. But that’s OK. Greta Van Fleet pulls this off so strikingly that I don’t mind and have listened to these songs on repeat.

I think these guys will learn and grow as a band and become even more unique, make their sound more their own. In the meanwhile, this is a band I want to support, and they sound like they’d be a heckuva lotta fun to see live, and I’ve heard that is indeed the case. The guitar work is good, the singing soulful, and the drums and bass decent. Check ’em out!