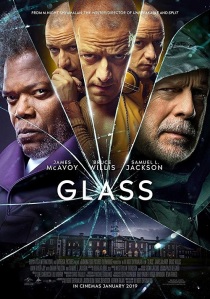 Edited by Luke Ciarrocchi (The Visit, Split) and Blu Murray (Sully, The 15:17 to Paris)

Also Produced by Marc Bienstock (The Visit, Split), Ashwin Rajan, and Jason Blum (Whiplash, Get Out)

M. Night Shyamalan’s Unbreakable was a revolutionary film, dissecting the superhero mythos before superhero movies had even exploded onto the pop culture scene. Released four months after X-Men and one year and a half before Spider-Man, Unbreakable told the story of David Dunn (Willis), a rather average seeming person who didn’t know he was a superhero, and Elijah Price (Jackson), a.k.a. Mr. Glass, a feeble man trying to create superheroes against whom to pit his master-class mind.

Sixteen years later, Shyamalan had fallen from grace but gained back a lot of movie lovers’ goodwill with Split, a classed-up B-type flick about an abused boy named Kevin Wendell Crumb (McAvoy) who grew up to be a troubled man with dissociative identity disorder and having twenty-four unique personalities, one of which was, essentially, a monster, feeding on the raw flesh of the “impure and untouched” and protecting the “pure who have suffered.” Then, right at the end of that film, Shyamalan revealed to us that Split was taking place in the same universe as Unbreakable.

Now, two years after Split and eighteen years after Unbreakable, comes Glass, the sequel to both, purporting to be the showdown between three comic book archetypes: the hero, the villain, and the mastermind. It might, however, just be a little more than that. . .

I’ll be honest, I had to ponder Glass a little while before I made any attempt at documenting my thoughts on the film.

Like any Shyamalan picture, Glass – the third film result of Shyamalan’s unlikely alliance with Blumhouse Productions – is far from a normal, mainstream movie. The closest he’s ever come, I think, to making something mainstream is his last film, Split, which is also one of his most popular and most financially successful productions. With that in mind, I must warn you: If you like Split more than Unbreakable, and if the primary reason you’re interested in Glass is a showdown between Kevin/The Horde and David Dunn, now known as The Overseer, you might be disappointed by Glass.

The first act of Glass fulfills our wishes to see the showdown between David and The Horde, and the cat-and-mouse game between them plays out suspensefully and excitingly. However, when the second act begins, Glass goes in a different direction, taking our three main characters to a mental institution run by a mysterious psychiatrist, Dr. Ellie Staple, who plans to convince David, Kevin, and Elijah that their so-called supernatural abilities are not supernatural abilities at all but rather elements in their imagination, fueled by faith. You must be engaged by this section, even though it causes the pacing to sag a bit, in order to remain seated on Shyamalan’s train, and if you are still on the train by the third act, which ramps up the pacing considerably, you must wait until the very end before passing judgement on the film’s events. You’ll find M. Night has performed a considerable amount of misdirection, sleight of hand, before revealing his endgame. The third act does not contain a Sixth Sense style twist, at least not quite, but it does subvert our expectations in some rather unexpected ways, though it is not just subversion for subversion’s sake. It’s different, but it does make sense, and it turns out that the movie itself has been a twist of sorts.

Whether you love or hate Glass, or even whether you simply like or dislike it, your opinion will depend upon your willingness to ride alongside Shyamalan. If you are willing, and you are all right with him playing with audience expectations, I think you’ll enjoy the film, as I did. Ultimately, it’s a movie about identity, belief, purpose, individuality, and influence, and it’s both an examination and a deconstruction of superhero myth and said myth’s influence and effect on people, individually and as a whole. It’s weird, unusual, and risky, and it caps off a trilogy about super heroes and super villains that has given its characters some of the most understandable backstories, motivations, and goals of any such films.

Yes, Shyamalan brings with him some of his worst instincts, like woodenly written dialogue that makes you wonder how much he actually knows about actual people, heavy-handed exposition, and uneven pacing, all things which could have been fixed with some script doctoring and more favorable editing, per usual, and some of the film’s final revelations are clumsily executed. On top of this, there are some spatial, realism, practicality, and interaction issues, though I can’t go into much more detail for the positive or the negative without drifting into spoiler territory. Yet Shyamalan also provides us with an interesting and surprising finale to this “Glass trilogy,” or “Eastrail 177 Trilogy” as he calls it, along with compelling ideas, good acting all around, impressive cinematography from the same guy who lensed the stunningly filmed It Follows, effective use of color, impressive depth, skillful utilization of Unbreakable deleted scenes, and the kind of detail that rewards repeat viewings.

It’s more Unbreakable than Split, that’s for sure, though it isn’t as good as Unbreakable, and many of the interesting themes in Glass were already covered well in Unbreakable. Regardless, Glass dissects the superhero mythos in a way other directors and writers, like Zack Snyder, have tried, but Shyamalan has done it more successfully, artistically at least. I will boldly say, though Glass is good but not great, that this has been one of the best superhero movie trilogies.

Some critics have been decrying Glass and denouncing Shyamalan himself once again. Yet Glass is far better than the films that sunk M. Night originally, far better than Lady in the Water, The Happening, The Last Airbender, and After Earth, and also better than The Village or The Visit. This guy is still making ballsy, non-commercial, unsafe stuff with a vision all his own, unconcerned with the current or the trendy. Even if you don’t like his works, his attitude is worthy of applause.