To make sure I give credit where credit’s due: I wasn’t going to write an article on this movie, but my wife convinced me to, and I’m glad she did. Here’s to you, honey!

There are two types of theater experiences I love.

The first is edifying. The credits roll, and I sit in my seat for a minute or two, letting the excellent film I just viewed sink in. The second experience is more fun. The credits roll, and I leap from my seat in excitement to tell all my friends about the awesome time I just had, whether the movie itself was actually good or not. If you are looking for that second kind of theater-going experience, I highly recommend you check out Jurassic World: Fallen Kingdom in theaters, not at home, though my recommendation does come with a few caveats, which I will get into. First things first.

That second kind of theater experience I mentioned, the exulting kind, can accompany, for me, two sorts of films. The first is a solid, fun flick, a good movie but one that also provides maximum entertainment value. I had just such a time already this year with Avengers: Infinity War, not a to-be classic or anything but an enjoyable ride of a motion picture that was both well-built and exhilarating, like a quality rollercoaster. The second sort of film provides a similar feeling but without the quality: a movie that is just complete, awesome, Velveeta schlock. Of course, the narrow, defining factors of fun schlock are extremely subjective, differing greatly from person to person. Each person knows it when he or she sees it. On my part, it’s defined by my guilty pleasure movies like Rocky IV, Top Gun, X-Men Origins: Wolverine, and my category favorite, Robin Hood: Prince of Thieves.

Now, I have another movie to add to that list: Jurassic World: Fallen Kingdom.

My wife and I were both at our local theater opening night for Jurassic World 2, waiting in a long line to see this new dinosaur chomper. Why, at the time, I wasn’t completely sure, but there I stood, wearing my Jurassic Park t-shirt, in direct contrast with my lovely spouse, who did not appear the shameless nerd I did.

We waited in line for twenty minutes to obtain our tickets and popcorn, and though I felt a tad impatient, already I could sense a palpable energy, as folks ran back and forth with sodas, popped corn, pizzas, pretzels, and other assorted greasy snacks, the smell of buttery, salty junk food filling the air. These people ran to and fro, and as their excitement grew, so did mine.

Twenty-five minutes after having arrived at the AMC, my wife and I finally walked into the theater, choosing a seat with relief just as the lights dimmed and the endless trailers gave way to the feature we were all present to watch.

The opening scene was thrilling and kind of spooky, with the usual unknowns getting hunted by dinos, because they had invaded an island where they did not belong. As they did, and as the dinosaurs revealed themselves, the room wherein we sat gave itself to what was going on up there on the big screen. As the movie progressed, we all jumped and cheered and sat on the edges of our seats and . . .

Cringed and laughed. A lot, actually. Though not necessarily when we were supposed to do. The laughs, they weren’t so much at the attempted jokes as at Fallen Kingdom’s many, many instances of unintentional hilarity. For example . . . well, I won’t actually go into spoilery examples, because I want you to witness them first-hand. I feel pretty sure you can have fun with them, because, with the cringeworthiness, cheesiness, corniness, crap characters (one of which inexplicably changed almost completely from the last movie to this one), numerous terrible script moments, and more, my wife and I and the rest of that theater had a blast!

Despite the trashiness, Fallen Kingdom does contain flashes of competency and even artistry. Spanish director J.A. Bayona – who directed The Orphanage, The Impossible, and A Monster Calls, all well-regarded – gave, as far as I can tell, Colin Trevorrow’s and Derek Connolly’s atrocious screenplay the best directorial effort possible, and the lighting, cinematography, coloring, and even some of the effects are quite marvelous. A+ for execution; F for story and script.

In other words, Jurassic World: Fallen Kingdom is glorious schlock, and you shouldn’t miss out on it.

I’m not going to give this movie a grade because a grade would not be indicative of the fun my wife and I had. 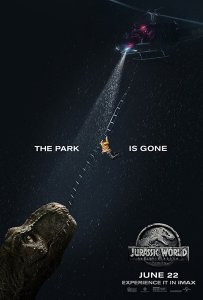 2 thoughts on “For a Good Time, Catch Jurassic World: Fallen Kingdom in Theaters”