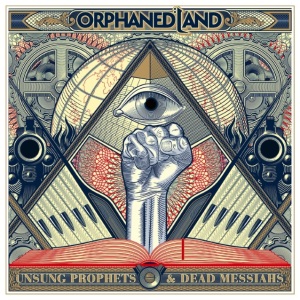 On Unsung Prophets & Dead Messiahs, Orphaned Land are alternatingly angry, exasperated, worn out, and reservedly hopeful. The truth is, they have good reason to be.

If you aren’t aware of Orphaned Land, I highly recommend you look into the band and their history. They’re an oriental progressive death metal outfit out of Israel, a country not always particularly warm to heavy metal, and they’ve seen a lot since 1991, when the group first came together under the name Resurrection. Orphaned Land went on hiatus in 1997 due to national turmoil, causing an eight-year gap between their second album, 1996’s El Norra Alila, and their third, 2004’s Mabool. Along with Mabool – and, in fact, before that, beginning with their 2001 comeback – Orphaned Land began to make some of the best, most unique, most fascinating prog metal of the 21st century, especially their two epic concept albums: Mabool, an ambitious album about Noah’s Flood, and 2010’s The Never Ending Way of the ORWarriOR, about the ancient struggle between good and evil.

Mixing Israeli, Arabic, and West Asian folk music with death metal, doom metal, and prog, and never avoiding religious themes, Orphaned Land have consistently produced interesting material. Five years after their last studio LP, All is One, here we are, getting another excellent addition to the Orphaned Land discography.

Replacing founding member and guitarist Yossi Sassi, guitarist Idan Amsalem joins the band on a record for the first time, and he, like Sassi, works well beside longtime guitarist Chen Balbus. There are some standout guests on the album too. Tomas Lindberg of At the Gates contributes some sweet growls on “Only the Dead Have Seen the End of War.” Prog legend Steve Hackett of Genesis fame adds stellar guitar work to “Chains Fall to Gravity.” And Blind Guardian’s Hansi Kürsch brings his own trademark vocals to “Like Orpheus.” Also, though All is One discarded Orphaned Land’s usual harsh vocals, exasperating many fans, Unsung Prophets brings them back. I’m not always partial to death growls, but I found Orphaned Land’s quite effective.

Still, with all the guests and the at times strange instrumentation going on, Farhi’s soaring lead vocals shine above all. His clean singing perfectly matches the melodies at hand, adding might to the verses and stirring passion to the choruses. Even his spoken-word sections work for me, and I don’t favor spoken word sections. For instance, a long, spoken word section on Caligula’s Horse’s 2017 In Contact almost turned me off to that record.

I mentioned above that Orphaned Land’s instrumentation is strange at times, and the same is true for their lofty arrangements. That’s because Orphaned Land injects their death and prog metal with heavy doses of oriental sounds, especially those with Israeli and Pakistani influences. They also prominently include choral and orchestral arrangements in the mix. In addition, harsh numbers often have a seat beside epic and/or lighter tracks, and some songs even contain all the above.

The production work is quite good, the band rejoining with Jens Bogren, who produced All is One, as well as a few albums I like from other bands, including Bloom by Caligula’s Horse, Machine Messiah by Sepultura, and Gods of Violence by Kreator.

As for the lyrics, they’re quite effective. If you’re used to hearing Orphaned Land promote peace and harmony, prepare to be surprised. Though there is some of that sentiment here, and unity and striving toward peace is certainly the call by the end of the tracks, most of what you’ll hear on Unsung Prophets is an inflamed Orphaned Land, ticked off at years of suffering and turmoil, which they’ve unfortunately had to witness firsthand. While many American or European metal bands can look out and see those things in our world, these guys reside smack dab in the middle of a hell. In their manner, that comes across.

According to a The Offering interview with Farhi, the lyrics here form a concept:

Unsung Prophets & Dead Messiahs is “a protest album, a very angry album that is based on the ‘Allegory of the Cave,’ which is something that was written by the Greek ancient philosopher Plato. He wrote this allegory as a story about the human behavior because the ancient Greeks, they killed the philosopher Socrates, and Plato couldn’t understand how they could kill such a guy who was a gift to humanity, how could they kill someone with the knowledge and wisdom. Then he figured out something about humanity’s behavior, that they are living in a cave, and they see shadows in the cave, and these shadows are the only truths that they know, and they don’t want to leave the cave, and anyone who will try to take them out of the cave, they will kill him.

“We took this as an allegory of today’s life. Every time that you see a revolutionary guy that came to humanity and tried to release them from the darkness, humanity has chosen to kill him. It could be Mahatma Gandhi for Indian people, or Martin Luther King. . . We thought, Plato is an ancient prophet in a way. He wrote this thing two-thousand five hundred years ago. This is like a prophecy. Those people who are revolutionaries, leaders, they are always ending up dead. They are like the dead messiahs in a way.

“This is a mirror to humanity to show them that we always blame religion or politicians, but it’s the people who do not change. It’s the people who prefer to stay in the darkness. This is a concept album and a very big protest that we have about it.”

To double down on their message, they added “bleeps” in spots, censoring words at four specific junctures. Farhi said, “We basically wanted to use the ‘beep’ sounds as parts of the music. Also as a part of the concept, as if we are trying to deliver a message and being silenced by the system.” They’re jarring when you hear them, especially upon a first, casual listen, but they effectually get the message across.

Getting into the tracks, this album has some of the best instrumental and lyrical moments in Orphaned Land history and at least two of their best songs, in my opinion: “We Do Not Resist,” one of the most fun, headbanging songs they’ve ever done, and “Chains Fall to Gravity,” one of their most memorable.

“The Cave” both starts the album off on a super strong foot and shows all the wonderful things this album has to offer. “We Do Not Resist” is aggressive oriental death and thrash metal. “In Propaganda” leans more heavily into the Middle Eastern side and is a little lighter. It leads right into the very prog rock “All Knowing Eye,” and lest you were afraid you weren’t going to get many guitar solos here, though some good ones came before, the lead axe work comes shining brightly, and the song ends in Dream Theater-style prog metal.

The Middle Eastern influences are back fully in “Yedidi,” which is sung in Hebrew and has an oriental beat. “Chains Fall to Gravity” is a return to the prog rock, houses an amazing guitar solo from Steve Hackett, is sometimes violin driven, is backed up by an orchestra, and has an atmospheric intro and outro. The bass stands out here too. “Like Orpheus” is a continuation to prog metal, and the bass stands out here as well.

“Poets of Prophetic Messianism” again brings in Eastern and oriental sounds with choirs and wails. “Left Behind” transitions to a deft balance of oriental and prog metal. “My Brother’s Keeper” has growls and spoken word. “Take My Hand” has spoken word and Farhi’s clean vocals on top of a rocking tune that’s also battering.

If you’re looking for more battering though, you’ll get it on “Only the Dead Have Seen the End of War,” where Shmuely’s skull-bashing drums take the spotlight, and the band takes their chance to get down into a breakdown. We also get both death growls and black metal yelps, then a choir at the end.

Unsung Prophets‘ finale, “The Manifest,” starts out on an atmospheric note then builds with a soulful guitar before we hear the band’s conclusion to this whole matter, at once both hopeful and despondent:

You are not obligated to complete the work,
But neither are you free to desist from it.

Sometimes, it seems to me that this world
Is nothing but a beta version of this amazing thing,
And while our maker has gone to his next improved version,
We are left behind in this Flying Dutchman.

Those blessed, cursed humans –
You may call them authors, true leaders,
Kings with no crown, or simple human beings –
They lived and died here.
They are always among us,
Those unsung prophets and dead messiahs.

Songs of bravery will always be new songs, forever.

These words lead up to a chilling recording of a quote from George Orwell’s 1984:

“In our world, there will be no emotions except fear, rage, triumph, and self-abasement. There will be no loyalty except loyalty to the party, but always there will be the intoxication of power. Always and every moment, there will be the thrill of victory, the sensation of trampling on an enemy who is helpless. If you want a picture of the future, imagine a boot stamping on a human face, forever. The moral to be drawn from this dangerous nightmare situation is a simple one: don’t let it happen.”

The track also features a return of a musical theme from “Chains Fall to Gravity.”

I’m going to give Orphaned Land’s Unsung Prophets and Dead Messiahs a 95%.

Sincere, majestic, unsettling, awakening, heavy, beautiful, consistently great. . . These are all descriptors that can be applied to Orphaned Land and Unsung Prophets and Dead Messiahs. Orphaned Land is tired, but I’m happy to see they are hopeful too, though only feeling there is hope if messages like theirs are heard.

Get the record and experience it for yourself, even if the music is a bit outside your comfort zone. It was outside mine, and Unsung Prophets is my favorite album of the year so far. It communicates tough emotion, Eastern politics, and quite a bit of philosophy through a musical offering that is somehow both challenging and easy to digest. I love this thing more every time I spin it.