The following review of A Cure For Wellness was submitted by one of our followers, Lambwise Hamgee. Enjoy!

Directed by Gore Verbinski (Pirates of the Caribbean, The Ring, Rango)

Written by Justin Haythe (The Clearing, The Snitch, The Lone Ranger)

Starring Dane DeHaan (Valerian and the City of a Thousand Planets, The Amazing Spider-Man 2), Jason Isaacs (Harry Potter, The Patriot), Mia Goth (The Survivalist and Marrowbone)

Purchase A Cure For Wellness [Blu-ray] via Amazon.

A Cure For Wellness is a horror/Thriller film that follows a man by the name Lockhart (DeHaan). He is an ambitious and somewhat condescending man, who thinks of himself superior to his colleagues. Dehaan did an excellent job with this character. There were three scenes that especially stood out to me, but I’ll spare the details. My favorite part of his acting was watching his reaction to pain, and throughout the movie it was believable. One scene towards the end of the film shows his character, getting badly injured. Unlike most heroes, he doesn’t get up immediately. Instead, he uses crawling and harsh breathing to portray panic and pain. This makes you appreciate the scene.

I was also impressed with the acting from Isaacs and Goth. Isaac’s character, Heinrich Volmer, was an interesting villain. He did an exceptional job at portraying a kind doctor, as well as a twisted man. Although most of his characters in films have been “the twisted bad guy you grow to hate” like in The Patriot, he does it well. On the other side of the spectrum, Goth’s character is likable but brings a lot of the weirdness to this movie. She has grown up in this center and has been sheltered her entire life by Volmer, who is like a father to her. Her storyline heavily reminds me of Rapunzel’s in the movie Tangled, which you will see throughout the film. She’s innocent and childlike and has never met a young man before. She’s never even been outside the center’s walls, and when she is convinced to leave, she is taken to a bar much like in Tangled. No, she isn’t obsessed with lanterns or has a pet chameleon, but the similarities are noticeable.

One thing I enjoyed was the suspense. This film made me think, and I liked that. Throughout the movie, you want to figure out what’s really going on at this “wellness center.” This movie demands attention, and if you looked away for just a moment, you would be completely lost. This can be frustrating to some, but I appreciated it. Many times throughout the film, the history of this center is brought up, but a different version every time. This adds to the suspense of not knowing exactly what’s going on. This is one of the main reasons people didn’t like this movie. It can be hard for some to watch a movie where you don’t know what to believe, and you’re not sure who you can really trust. Personally, I thought this was, for the most part, a smart decision. It gives you a feeling of relief and satisfaction when the movie comes to an end.

With a runtime of 146 minutes, the movie was too long for my taste, but it never bored me. I enjoyed the movie, particularly the acting and cinematography work by Bojan Bazeli. In my opinion, the movie was very well shot and the entire “wellness center” was stunning. Although the movie was beautiful, it still had plenty of flaws. One scene specifically shows a deer running in front of a car. The deer was clearly CGI and rather underwhelming, but the crash it caused was anything but underwhelming. I loved the angles they chose to shoot this crash, and at times it felt like you were tumbling down the hill with them.

Not only did I enjoy the cinematography of this film, but the sound effects as well. They did an excellent job of making the environment eerie, and unsettling. Even something so small as the frequent sound of crutches squeaking on the tile floors added to each scene. Like most horror movies, this film aims to haunt you and make you feel uncomfortable. It succeeds in certain scenes but fails in others. I enjoyed most of the horror aspects of this film, especially the torture scenes I briefly mentioned earlier, but it could have gone without a lot of mature content, that added to the shock factor of this film in an off-putting way. One thing that I’m still unsure of is the use of eels throughout the film. The gates to this center are two eels interweaving together, and the same image is used on an envelope seal. They also play a big part in driving Lockhart mad, but in the end, I’m not so sure they were significant other than adding another element of terror. 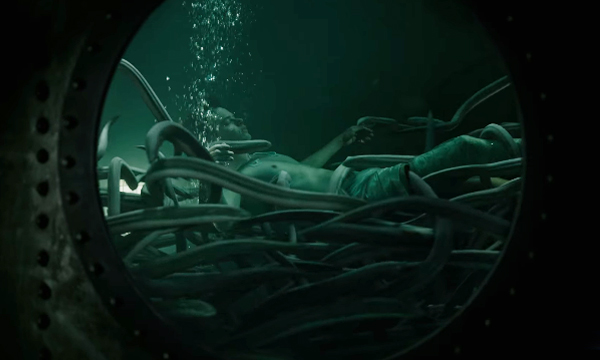 If I decide to ever watch this movie again I will have to look for a better reason, as well as an explanation to a few questions that arise in the film. I did, however, appreciate the type of horror this movie was. It wasn’t filled with copious amounts of gore and jump scares. Instead, it was psychological and unsettling. It showed the characters being driven to madness, which was very entertaining. The film does remind me somewhat of Stephen King’s The Shining. Its imagery and editing are weird and unusual and some scenes make you squirm in your seat, but it makes the film that much better. One other movie I was briefly reminded of, was Captain America: The First Avenger. In the final act, there is a scene where a character has a reveal that is almost identical to Redskull’s reveal. It isn’t exactly the same, but if you stick around till the end of this long movie you will see the clear resemblance.

Although this film bombed at the box office and was given plenty of negative reviews, I personally thought it was well made and interesting. Sure, it was a weird and a very odd-ball movie, but that’s what made this movie unique. It’s an original film, which is a big deal for Hollywood. Understandably, most people don’t enjoy this sort of film and even hated it. I do agree that some of the elements in this film have been seen before and can be compared to other movies, but it was still its own movie, and for the most part, its own idea.

In conclusion, I enjoyed the chances this film took and I especially enjoyed the cinematography, but a few scenes could have been edited to shorten it and make it a better film. I appreciated the film, but I won’t be watching it again anytime soon.

5 thoughts on “Movie Review – A Cure for Wellness”