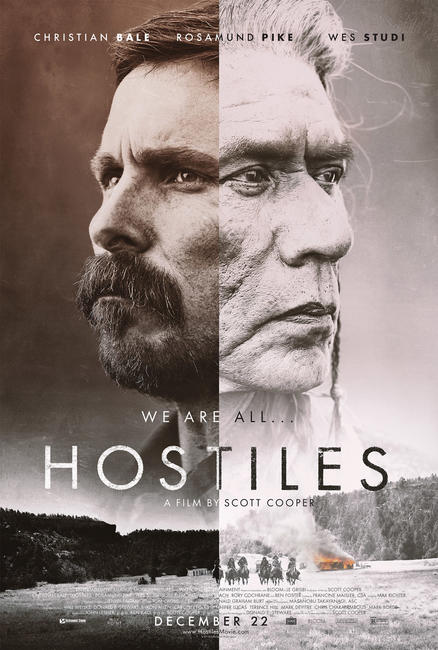 Directed by Scott Cooper (Black Mass, Out of the Furnace)

Robert Duvall has said that “The English have Shakespeare, the French have Moliere, the Russians have Chekhov. The Western is ours.” I’d agree. To me, the American Western is a work of art. It’s something that is a part of my childhood and has made a big impact on my taste in film. The plots may be simple, because all you need is a good guy who has been wronged by the bad guy and is seeking either revenge or justice, but it’s often the journey that keeps me interested. The beautiful scenery, exhilarating music, and a picture of simpler times all appeal to me.

Tombstone, Unforgiven, Open Range and The Good, the Bad and the Ugly are all to me snapshots in history of what the West was like through a glorified lens by bringing stories to life, whether they’re true or not. There’s something to be said for nerves of steel in a gunfight when facing possible death, and keeping a cool head through tough circumstances. That’s part of what drew me to love these westerns I’ve mentioned. Kurt Russell’s Wyatt Earp, Clint Eastwood’s William Munny, and Kevin Costner’s Charley Waite all had something in common: they were just cool. Christian Bale’s Captain Joseph Blocker in Hostiles had a similar disposition.

As usual, Christian Bale delivers an authentic, captivating performance. In fact, I can’t think of a role where Bale disappointed me. He seems to be fully committed to any role he takes on and it shows in his performances. I’d suggest that he’s on the same level of acting as the likes of Gary Oldman, Daniel Day-Lewis, and Viggo Mortensen. Each never seem to take any role lightly and take pride in whatever part they play. In Hostiles, Bale plays Captain Joseph Blocker, who has a rather checkered past with Native Americans during his time in the U.S. Army. In Hostiles, we see Bale take on a sober, direct individual that is duty driven, but just might have room for someone else in his life other than his soldiers.

Rosamund Pike once again impresses here as she has established herself an accomplished actress. She has shown great variety in her roles varying from a James Bond antagonist in Die Another Day to a cunning and manipulative wife in Gone Girl. In Hostiles, she is Rosalie Quaid and loses everyone dearest to her. Her world becomes shattered just before she crosses paths with Joseph, and slowly she tries to find some semblance of sanity and self-worth to continue living. Joseph, being rather awkward in his attempt to help a grieving widow, casts aside the soldier in him and takes on the role of a gentleman, and helps Rosalie in any way that he can. Slowly, she helps herself by allowing Joseph to help her, and she becomes grateful for the time and effort he puts into making her as comfortable as possible given the circumstances. Traveling with a troop of soldiers transporting Cheyenne Indians isn’t ideal when your family has just been slaughtered by Comanche. Despite the Indian tribes being vastly different, she must overcome her unease with her traveling companions by allowing them even to help her. She will have to make adjustments.

The movie’s point was at the end of a meandering story at times, but a conclusion to the story was finally made, and it left me somewhat satisfied. In summary, Captain Joseph Blocker was charged with transporting Chief Yellow Hawk (Studi) to his home in Montana. This may not seem such a difficult task given that Joseph has paperwork from President Hayes himself with the orders for transport, so he shouldn’t have any obstacles on the journey, right? Well, couple the facts that the Chief and Joseph are former enemies on the battlefield and the Chief has aggressive cancer, which inevitably makes the traveling pace a little slow.

Let’s spend a moment with Joseph and Chief Yellow Hawk’s past. They don’t really like each other and for good reason. They each have lost dear friends on the battlefield and Joseph vividly remembers his men dying by the hand of the Chief. Colonel Abram Biggs (Lang) knows this, but threatens to court martial Joseph if he does not take the assignment, so Joseph is left without much of a choice. These details are revealed early in the story and set the stage for a rather bumpy journey.

As with any good Western, troubles come to pass for the traveling party which they must overcome despite great loss. Along with Joseph, some of his men have done unspeakable things to men, women, and children and seek much-desired peace with their demons. Some will. Some won’t.

I say the conclusion of the story left me somewhat satisfied because I felt either the ending could have let certain characters survive that I felt should have, or the story could have cut some fat. The movie was a bit over two hours, and probably could have been cut to a little under that. Like many westerns, there were moments that drew me into a lull that left me relying on the scenery rather than dialog. That’s not always terrible, but these moments should be kept to a minimum in order to keep the plot advancing.

Although I thought the ending could have been improved upon, Joseph and Rosalie both made the right decisions in their life. Joseph was nearing the end of his military career, and Rosalie was starting over, so I just knew for sure they would somehow wind up together, and help each other find purpose for their lives. It wasn’t until the end of the movie that the question of their future would be answered.

For this review, I didn’t spend much time on Chief Yellow Hawk and his family, because even though the point of the film may have been getting him home, I felt it was the development and maturation of Joseph and Rosalie that was the most interesting in prominent aspect of the film. We see them both angry and frustrated early in the story for different reasons, but slowly they begin to think about their futures and even think of a future together. Will Joseph finally be able to put aside his hatred for the Chief and let his past die? Will Rosalie be able to live again? Hostiles wasn’t my favorite Western by any means, but it is worth the movie ticket to see it.