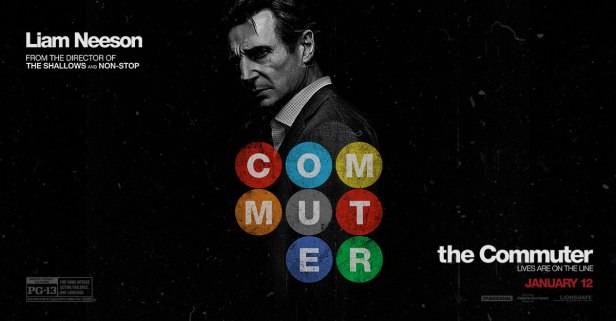 For an old guy, Liam Neeson is a tough cookie. As an avid fan of Taken, I rather enjoyed his take on how to deal with terrorists. The story of The Commuter isn’t quite the same, but there are still some baddies seeking to do ill towards those that seek justice, and Michael MacCauley (Neeson) is caught in the middle.

Michael MacCauley is a former NYPD officer who has a wife and an 18 year old son who is preparing to start college at Syracuse. Michael sells life insurance until he gets fired unceremoniously due to his lack of “output.” He and his wife had lost all of their savings, retirement, and their livelihood after the 2008 crash, and were forced to take another mortgage. Suddenly, after they had pieced their life back together, the rug gets snatched out from under Michael, right before his son’s first tuition payment comes due.
Michael doesn’t have the stomach to bear his wife the bad news, so he goes to the pub with Murphy (Wilson), his former partner of 7 years, and drinks his problems away until the 6:25 train home. This is where the story picks up as he is approached by a peculiar woman (Farmiga) who claims she has a way of determining what kind of a person someone is, and that everyone fits into one of 16 psychological profiles or personalities. She wants to figure out what kind of person Michael is so she poses a “hypothetical” question: “would you be willing to determine who doesn’t belong on this train? If you do, the reward is $100,000.” Michael shakes off the question because of the hypothetical tag, but he soon realizes that she’s not kidding, and this isn’t some random psychological exercise.

From there the inner struggle with Michael becomes evident. Does he take the money? Why shouldn’t he? Considering he just lost his job, and there’s no way he can afford to take care of his family, maybe taking the money and completing this simple task isn’t such a bad thing after all. Or maybe, he does the right thing, takes the proverbial high road and notifies the authorities. Besides, he is a former cop and he still has that inner desire to the ethically and morally right thing. What would you do?

To me, this simple story does an excellent job of showcasing everyday problems that everyday people face and the difficult choices that have to be made when thrown into tough circumstances. I felt bad for Michael, but I also felt bad for those who inevitably were affected by Michael’s actions, and that’s the part of the movie that I felt was the most gripping.

Aside from the story, I thought there was ample character development for Michael, considering he was the main character, but we also get background on a few of the train’s passengers, and for the most part, the dialogue among the commuters seemed organic enough and kept me interested.

For those seeking action, you’ll have to wait a while, but it’ll be worth it. Neeson does get a few opportunities to dispense punishment, but he does portray a 60 year old man in Michael and does a good job of keeping that in perspective. Don’t expect Michael to suddenly act like a trained assassin when an attempt on his life is made. More than anything, his wits are what help him the most in a scuffle – something you would certainly expect coming from a former cop.

All in all, The Commuter did exceed my expectations considering my skepticism with the preview. I had originally thought the plot was going to be all too predictable, but there were some nice surprises thrown in, and the characters, dialogue, and the well-choreographed fighting were plenty to keep me interested throughout.

2 thoughts on “Movie Review – The Commuter”