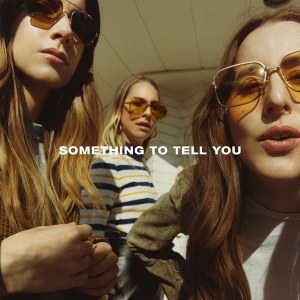 Title: Something to Tell You

Strange as it may seem for a guy with my musical tastes, I kind of love Haim.

Listening to Haim started out, for my wife and I, as us making fun of the super retro funkiness of their song “Falling” from their debut album Days Are Gone. Yet that developed, for both of us, into an appreciation of a band that I think is one of the freshest, most unique, most fun acts in the pop/rock sphere today. They have a real rock ‘n’ roll feel with an ever-present funky, groovy side, plus modern pop sensibilities. They perform, especially live, with an energetic vibrancy that simply makes me smile, and they play in a very straightforward way, like a ’70s rock band would have done. Though Days are Gone is by no means perfect, I’ve spun it countless times and never grow tired of most of its catchy tunes, despite their tendency for relationship drama.

With this new album, I don’t know why, but I just don’t feel as enthused about it. Yes, the girls have improved instrumentally, and I’m happy to see them experimenting in the studio like they are. Few other current pop rock bands blend genres and sounds as effectively as Haim does here. We hear great hooks, interwoven instrumentation, pleasing layering, an emphasis on percussion, and tunes that soar and fall pleasurably. Though Stevie Nicks makes no appearance, her presence, and indeed all of Fleetwood Mac’s presence in general, is palpable. The production brings to mind Fleetwood Mac, and something like the polish of the Eagles as well. Also awesome, the girls are still leaning heavily on Danielle’s and Alana’s guitars and Este’s bass to provide both the foundation and the meat of their sound. And each song’s composition feels carefully studied. Something to Tell You finds Haim composed and confident.

Still, in listening to the album in one sitting, I can’t help but get slightly bored. Maybe it’s that they’ve left behind some of Days Are Gone‘s bright exuberance, or maybe it’s the fact that the lyrics haven’t really seemed to have improved, on top of their still dealing primarily with whiny relationship exasperations. Plus, there are injections of ’90s pop and soft rock scattered throughout that, unlike the ’70s and ’80s retro material, feels uncomfortably dated. They, and their producers, have also added in some cringey spoken sections and overwhelming synths that don’t work for me.

However, despite my negatives with Something to Tell You, I do enjoy it, and I can certainly recommend it. It’s commendable that Haim made their own album, a very Haim record, and didn’t just call in all their popular friends to help out and make sure every song is a radio and streaming hit.

My favorite tracks here are “Nothing’s Wrong,” “Little of Your Love,” “Right Now,” and “Night So Long.”