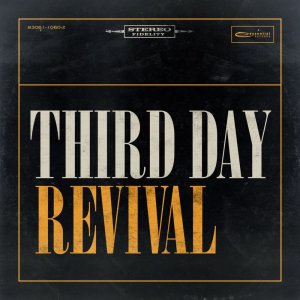 Revival is truly a return to roots for Third Day. They’ve brought back producer Monroe James, who worked with them on Time and Come Together, and the other record most like this one in Third Day’s discography is 1999’s Time. They even finally recorded the album at world-famous Fame Studios in Muscle Shoals, Alabama, where such greats as Aretha Franklin, Etta James, Wilson Pickett, and The Rolling Stones recorded some of their best music, and where southern rock – a genre from which Third Day has always drawn heavily – arguably got its start with the famous “Hey Jude” cover by Wilson Pickett and Duane Allman.

Oh, and they got some help on Revival from vocal quartet The Oak Ridge Boys with awesome backing vocals, Allen Branstetter of the Alabama soul band St. Paul and the Broken Bones with some trumpet contributions, and a variety of other – mostly studio-type – southern musicians with backing vocals and instruments to fill out the sound.

However, Revival still can’t quite overcome the feeling of, in some ways, being a best hits album from the entirety of Third Day’s career. It is a collection of musical sounds and lyrics that Mac Powell and the gang have visited and revisited time and time again since their inception in 1991. So there is a dichotomy I see. I find myself nearly loving Revival, but I also find it somewhat derivative of Third Day’s past works. That in mind, it is quite good.

On Revival, we hear influences from such eclectic genres as southern rock, blues, grunge, alt rock, worship music, indie rock, folk rock, country, soul, and – most beautifully – southern gospel. The band plays it passionately, especially Mac Powell, whose inspired, soulful, Alabamian, Southern-fried lead vocals are at their best here. The genre mash-up is certainly appealing to me, too, on top of the fact that it’s certainly not your run-of-the-mill CCM. If you’ve never heard Third Day, and what you’ve heard of Revelation intrigues you, the album is a good starting place with the band. It represents the best of them well.

Does it wade a little too deep into its influences at times? Well, yes, especially in lyrical moments like on “Loves Me Like a Rock,” where Mac compares the love of his “Mama” to the love of God in a cringey but uniquely southern way. Still, that’s the same sort of thing that makes Revival infinitely more interesting than Third Day’s last two albums, maybe their last five.

In conclusion, Revelation doesn’t get too close to touching Third Day’s highest points – for me, Conspiracy No. 5, Time, and Wire – but it is a decent album and should please even Third Day’s staunchest fans. It’s energetic, extremely southern, often guitar-driven, gospel music, and that is rather refreshing in the current field of too-often-generic CCM releases. And it contains some of the best Third Day tunes in years.

My favorite tracks are “Revival,” “Gather ‘Round Now,” “Nobody Loves Me Like Jesus,” “Great God Almighty,” and “Devotion.”