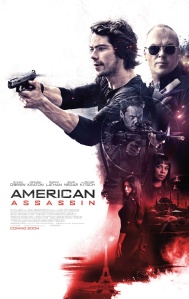 Produced by Lorenzo di Vonaventura (Shooter, RED) and Nick Wechsler (The Road, Under the Skin)

Based on one of the novels from Vince Flynn’s popular Mitch Rapp series, this is about as smart as American Assassin ever gets, despite how seriously the movie takes itself, and despite the fact that the movie does attempt to ground itself in the reality of terrorism today. American Assassin is also one of the most perfectly OK, just fine, average movies I’ve seen in a while. Still, it can be a fun time at the movies if you’re willing to turn off your brain and have some action movie fun.

The action itself ranges from competent to good, the story moves fast, some exciting fights occur, and both Dylan O’Brien and Michael Keaton go all in with their performances, adding what physicality and believability they can to their characters. It is good to see Michael Keaton get flat out crazy in moments, and he still has it, if he hasn’t proved that already with the wide variety of other roles he’s taken in the past three or so years. And, seriously, O’Brien needs to be in a great movie. He is one of the best up-and-coming male action stars, always throwing everything he has into his roles. Taylor Kitsch, another underrated actor, plays the main villain, and though his character contrasts what little realism the movie contains with his only-in-the-movies bad guy, that’s not his fault, and he does well with what he’s given. It’s also good to see David Suchet in another film, even if his role is small.

Everything else about the movie? Pretty mediocre. Not bad, not good. What starts out as an interesting revenge thriller set to the backdrop of terrorism in Europe and the Middle East turns into a cliché black ops/rogue agent movie. Also, the filmmakers could have vastly improved the film by evening out the pacing, sharpening the dialogue, developing the characters more fully, making the big bad more grounded and realistic like the rest of the movie’s villains, and giving us a clearer, less quickly cut look at the action sequences to better showcase the actors’ commitments to their roles.

Like I said, it’s just fine. Definitely worth checking out when it appears on streaming or Redbox. It’s an enjoyable couple of hours in the same category, for me, as movies like The Transporter, Behind Enemy Lines, Olympus Has Fallen, and 2 Guns, action flicks that you can enjoy as popcorn-munchers but little else.

As a plus for my politically conservative readers, this movie comes from a fairly conservative point of view on terrorism, which is certainly interesting to see in a big budget Hollywood movie these days.

I’m going to give American Assassin a 62%.