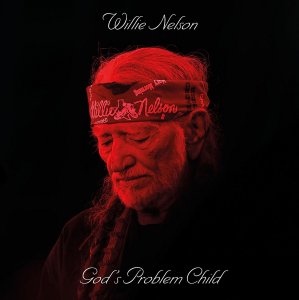 If you are looking for a new release of traditional country done right, look no further. God’s Problem Child is probably the best country of its kind that we’ll get this year. Not only that, but it’s also some of the best material Willie Nelson has released in quite some time. His vocal performance is better here than it has been in years, taking full advantage of his strengths and making up for his weaknesses. The laid-back, stripped-down style also benefits Willie’s sound, as always, and Nelson shows us that he still has the ability to write and sing soulful, honest, clever lyrics. If you want a glimpse of what country used to be all about, take a listen. Whatever your musical preferences, if you have a soft spot for country, don’t miss this one, if only for the fact that Willie Nelson is one of the few country legends left alive and kicking, and he’s certainly one of the precious few who can still perform at this level.

Is this a perfect album? No. It does contain a few weak and forgettable songs, Nelson’s voice still cracks more than it should every once in a while, the lyrics are occasionally a little lazy, and it’s no Shotgun Willie, Red Headed Stranger, or Stardust, but it is a quality collection of country tunes, and far more than we should expect of an 84-year-old artist. Nelson ought to be able to do whatever he wants. Thank goodness whatever he wants is still make fantastic music.

Also of note are guest vocals by Leon Russell on “God’s Problem Child” in one of the last sessions before he died, Alison Krauss’s backing vocals on “True Love” and “Little House on the Hill,” and a touching tribute to Merle Haggard. Check it out now.

Title: From A Room, Volume 1

From A Room, Volume 1 is yet another home-cooked, traditional-sounding, southern born-and-bred record produced by the now-legendary Dave Cobb, following Stapleton’s excellent 2015 debut, Traveller.

Though I’m listing the album’s genre as country, it’s actually a mix of country, blues, soul, folk rock, roots rock, and Southern rock. On the album, Stapleton evokes the sounds of such classic artists as Willie Nelson, Waylon Jennings, Merle Haggard, George Jones, Ray Charles, B.B. King, Stevie Ray Vaughan, Keith Whitley, Bob Dylan, and Lynyrd Skynyrd. Of course, these are all artists a Kentuckian like Stapleton would have assimilated and emulated, but there are precious few singers and pickers alive that do it so well and with such feeling. This new album is a prime, though not perfect, example of Stapleton’s talents.

I don’t like From A Room quite as much as Traveller, and I think that’s due to the production and emotional impact of the songs. In production, though I have praised Dave Cobb before, what he – and, to be fair, Chris Stapleton – does here to lay Stapleton’s music bare and naked, while it does invoke the correct mood, leaves me wondering what the album could have been. I would have loved to have heard Stapleton’s powerfully emotive vocals backed by fuller instrumentation and given a bit more space to play in. For emotional impact of the songs, there just aren’t as many here that hit home for me like some of the tracks on Traveller. That could, of course, be partially because the runtime is about half of Traveller‘s, and because the tunes on From A Room aren’t necessarily quite as bold or striking.

Either way, From A Room, Volume 1 has much to love. If you’re at all interested, check it out. Last I heard, Volume 2 will drop this fall.

Favorite Songs: “Broken Halos,” “Second One to Know,” “I Was Wrong,” and “Death Row”

I’ve always found the Zac Brown Band one of the best current country acts. They’re excellent instrumentally and vocally, they have strong songwriting skills, and they’re not afraid to experiment every now and then. They’re also both reverent toward traditional country and aware of modern country without being bound to either.

Welcome Home is basically a distillation of the by now well-established Zac Brown Band formula, with all its positives and negatives, stripped down, honed in on, and distilled into an album that barely runs over half-an-hour. It doesn’t necessarily have the highs of their better works, but it doesn’t really have any major lows either.

To further explain, this is the band at their most non-indulgent, most quite, and most settled. Though there aren’t any career highs, there are certainly some good songs. If you like Zac Brown Band’s country sound, here it is, one for you, especially if you disliked their last outing, Jekyll and Hyde, where they explored multiple genres including hard rock and electronic pop. Brown’s vocals are as good as ever, he has a couple good duets with Aslyn and Kacey Musgraves, and the band behind it all is proficient and always competent, providing both a solid foundation and excellent harmonization. They do sound more untampered here, too, more than they have on any of their studio albums so far, thanks to the amazing country producer Dave Cobb.

If you’ve never heard the Zac Brown Band before, this is certainly a good entry point into their discography, as this album really boils down what they’re all about. If you like the Zac Brown Band, this will be an excellent but somewhat inessential addition to your collection. If you dislike Zac Brown and company, this won’t change your mind. Welcome Home is good but not great.

One thought on “3 Quality 2017 Country Releases”