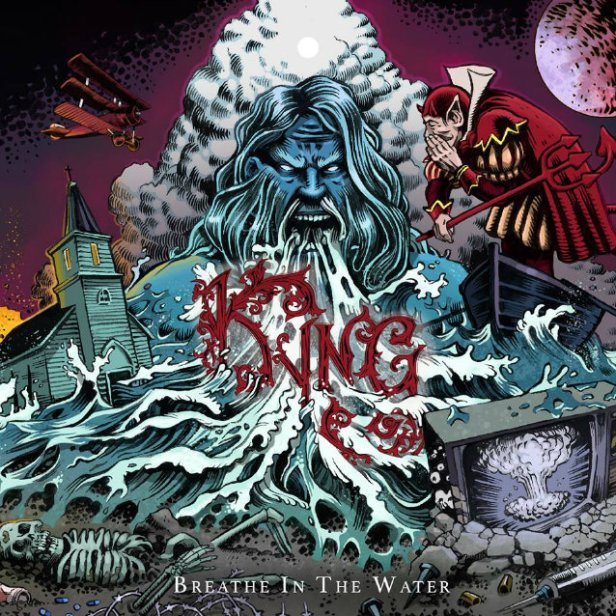 Title: Breathe in the Water

Purchase Breathe In The Water via Amazon.

Kyng is one of the many bands hailing from L.A., and has kind of gotten lost in all of the noise in the heavy metal/hard rock scene. With a multitude bands in the genre and with little original material being produced and released, it’s hard for bands to make their mark in the music industry. Also consider the manner in which albums are bought, or should I say streamed and downloaded, and that further complicates things for newer bands trying to gain traction. It may seem easier for a group of guys to start writing music and post their material online to gain recognition and catch a break, but if it seems easy, then hordes of aspiring musicians are going to try their hand at it. Add the enormous, social media aspect of the music industry on top of all that, and most bands now all seem to be lumped together and begin to seem cheap and less unique, being driven by their exposure to social media rather than their desire to write creative music. After listening to Breathe in the Water, it’s safe to say Kyng is driven by producing thought-provoking, creative, and influential music.

If you’re not entirely familiar with Kyng, but think you’ve perhaps heard a song by them, “Pristine Warning” was probably it. One of their more commercially successful songs, “Pristine Warning” opens the album, and sets the tone for the rest of the tracks. With a runtime of just over three minutes, each second is packed with fun. I’ve found myself over the last few days playing this song numerous times since I just can’t get enough of it. When I heard the song for the first time, I was hooked immediately by Clarke’s double bass drums, then I head Eddie Veliz pierce the waves with his cutting and clear voice. At the onset of hearing Veliz’s voice, I knew I was in good hands. But wait, there’s more – not only was Veliz impressive pushing air over his vocal chords, but Castaneda’s harmonizing backup vocals on the chorus were tight and went marvelously with the feel of the song. The song, being propelled by Clarke on the drums, never seems to quit and only seems to take a breather around the two minute mark until Veliz breaks out into an almost unexpected guitar solo that is worthy of a solo on Metallica’s debut effort Kill ‘Em All. The guitar solo was thrashing good, and the entire song never lets up and never grows stale. Listen. Enjoy. Repeat. It may be the album’s best track, but this album has way more to offer.

Continuing, the album’s second track “Breathe in the Water” mellows things out from the thrash pace in “Pristine Warning”, and allows us to hear Castaneda slap the bass in the song’s verses. I really appreciate a band that allows their bass player to get some love, and thankfully “Breathe in the Water” isn’t the only song where they allow Castaneda to shine – listen to “Closer to the End” to hear a groovy bass intro provided by Castaneda. Continuing on the theme of good vocals from Veliz, I think this track showcases his range and control even more. Having heard this song from a studio recording, I’d really like to see these guys live and hear them perform this song. Hearing bands live will reveal just how good a singer’s voice holds up for a couple hours, and I’d imagine that Veliz wouldn’t disappoint. 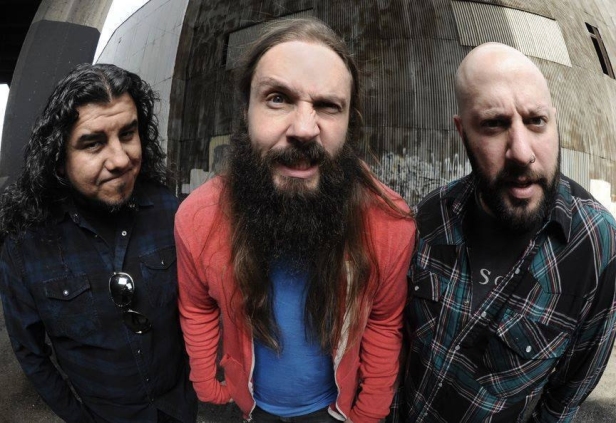 Showing Kyng’s softer side, “Show Me Your Love” relies upon an acoustic guitar, soft drums, and resonating vocals to carry the song through its introduction. The opening has more of a Blues feel to it until 1:15 or so, when a sudden change in vibe occurs with the introduction of Veliz’s electric guitar. Musically beautiful and lyrically well written, “Show Me Your Love” shows me that Kyng is more than just a metal band that likes to put together head banging ballads; they have some good music writing chops as well.

While “Show Me Your Love” was perhaps the best-rounded song on the album, “The Dead” has the most memorable guitar lick on the album. The song begins with soft drums and light-hearted guitar picking until a switch is flipped and the band goes into full bore mode. But it’s not the heavy sound that drew me to this song, it’s the guitar riff that permeates the verses and chorus. Seemingly whimsical, the riff gives me a glimpse into the creativity of Kyng and reveals their genius. Just like Ghost’s “Square Hammer”, “The Dead” provides a riff that will stick in your mind and won’t go away anytime soon.

I could continue going through the rest of album’s tracks to justify why I liked it so much, but I think you get the point: Breathe in the Water is an excellent effort put forth by Kyng. Just for good measure, take a listen to “Bipolar Schemes” and “The Battle of Saint/Lines”; you won’t be disappointed. Having discovered Breathe in the Water just a couple of weeks ago, it was a welcome treat and it has been added to my list of top albums of 2016. Having listened to it in its entirety a few times, I feel confident in saying that it’s one of the more well thought out albums in recent years. I think Eddie Veliz said it best so I’ll let him finish this review: “We were finally able to create a record that had zero stigmas to appease the industry. Every song on this record came from the depth of what Kyng truly is as a band. This album is far beyond anything that we have done in the past. Some of my best work resides in Breathe in the Water.”

P.S. The intro to “Not Enough” seemed to have a bit of a Rush sound, and “Song For a Broken Masque” seemed akin to Stone Temple Pilots’ “Plush.” Listen to them and see what you think.

3 thoughts on “Music Review – Kyng’s Breathe in the Water”