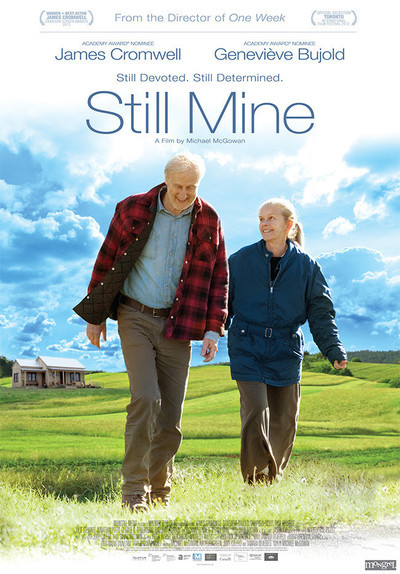 Purchase Still Mine via Amazon.

Craig Morrison (Cromwell) has never once considered himself to be above the law, until now. For many years he has worked a farm with his wife and seven children, but as he and his wife Irene (Bujold) grow older and all of the kids now have children of their own, things seem to be slowing down. The Morrison’s have freezers in their front yard serving as flower pots that are functional, but their daughter Ruth (Stewart) thinks it makes her parents look like trailer trash. Craig doesn’t care. He believes the older you get, the less you care. Craig and Irene get their milk from Ruth and her husband, resisting purchases from the store, and Craig tends to an acre of strawberries and a herd of cows to occupy his time. Irene keeps a neat house and restrains Craig from strangling their friend Chester (Robertson), a busy body, crotchety old man who likes to bug the stew out of Craig. After sixty years of marriage, Craig and Irene still love each other dearly. But all is not well.

Irene suffers from a form of dementia which seems to be getting worse. It is not uncommon for her to forget what she was saying or a conversation she had with Craig just moments ago. This worries Ruth and John (Roberts), their two closest children, to the point where they think it’s time their father explores the possibilities of home care. Craig is having none of it. After sixty years of marriage, he’d rather cut off an arm than to see his beloved be taken care of by somebody else. To make matters worse, their cows keep getting out since Craig can’t keep up with the fencing, and he can longer sell strawberries due to regulations requiring a refrigerated truck, which he can’t afford. Suddenly, Craig has a lot of time to ponder things, so he comes up with a plan. Irene needs a smaller, one story house that suits her and is easier to maintain for the couple. Since they can’t afford to hire a contractor for the construction, Craig decides to put his wood working skills learned from his father to good use. At eighty-seven years young, his kids think he’s crazy, but no one is going to stop Craig.

Except maybe getting a permit for construction. Craig’s dear friend Chester informs him happily that building a house, even on one’s own property, requires a permit – a ridiculous task in the mind of Craig. So he relents, and purchases his permit. Upon purchasing the permit, he is instructed to come up with architectural plans for the home, which will cost him more money. Since he thinks the whole process is ridiculous, and anybody should be able to build on his own friggin’ property, he begins construction without the proper plans, and gets a legally-binding stop work order issued by Mr. Rick Daigle (Potts), who has a stick shoved up his hind end, and offers no leeway to Craig. After weeks of legal battle, Craig relents and hopes that Mr. Daigle will come around and soften up on the strict regulations. Unfortunately, Irene falls down the stairs and escalates the situation and the need for Craig to finish the home that he promised his wife.

Cromwell and Bujold delivered moving performances and beautifully portrayed a couple that had stuck together through some difficult times. It seems as though folks today don’t take the sanctity of marriage as seriously as in times past, so it was refreshing to see a film that cast the level of commitment that the Morrison’s had in a positive light. I’ve not seen Cromwell give a bad performance before, and I still haven’t. If this film doesn’t move you in any way, you are an oak.