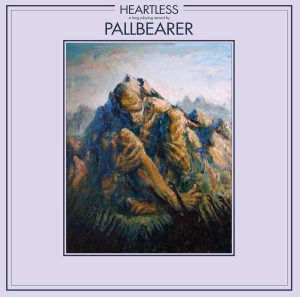 After consuming a lot of fast and aggressive metal here recently, Pallbearer’s new album was an excellent change in pace for me. However, I didn’t necessarily go into it with many expectations, only checking it out after several reviewers I follow recommended it.

In the five years that Pallbearer has been releasing studio albums thus far, this doom metal band from Arkansas have become favorites for fans and critics alike. Since their 2012 debut, Sorrow and Extinction, they have been on a fast trajectory to metal fame and acclaim, reflecting in many ways the rise of one of my favorite bands, Mastodon, after their debut ten years before. Their acclaim continued with their sophomore release, Foundations of Burden, with that album further adding more melodic context and cementing their sound, though not necessarily progressing it. Their sound is progressed, however, on Heartless, both improving the sound they have created and implementing many Baroness style prog elements.

To be honest, I found Pallbearer’s first two albums to be interesting and good but flawed and kind of boring. See, doom metal is not really my thing, as it is based on long, slow, weighty, sad elements and repetition that, when done well, just marinates. Usually, for me though, this ends with having a dull experience. That personal problem or opinion I have is actually transcended on Heartless. Not only did I like listening to this album, but I also liked listening to it all in one sitting, and I even listened to it on repeat, something very unusual for me, especially with subgenres like this. So don’t tune out Heartless just because you don’t usually enjoy doom metal or just because you haven’t been crazy about the band’s past output. If you do, you’ll miss a fantastic 2017 release.

On their previous two records, Pallbearer were already proving themselves worthy musicians. Now they have improved their compositions, and Campbell has improved his vocals. Pallbearer’s music here is well-mixed, atmospheric, meditative, and complex, with the band as a whole sounding big, brooding, melodic, and rhythmic. Campbell’s lead vocals are beautiful, clean, and haunting, with a wide and soaring vocal range. He sounds like a mix between what he sounded like on the first two albums, plus Steve Walsh, Geddy Lee, and Billie Joe Armstrong. Sorry if that’s a terribly corrupt comparison. It’s what I hear!

The vocals are accompanied by meditative lyrics that beautifully fit the songs and moods, well-placed harmonies, and massive, lumbering, mournful riffs that the whole band gets behind. The spiraling, drifting, often-harmonizing guitars – both in rhythm and in solos reminiscent of Knopfler and Gilmore – and solid bass provide the heft while the drums maintain a solid, rhythmic foundation, and the instruments and melodies take their time wonderfully.

More than most in the doom metal subgenre, Pallbearer – aided by a vibrant, warm production – creates gorgeously palpable sounds out of minimal riffs, and like I mentioned before, here they mix in large helping of prog elements throughout, bringing to mind Baroness, in addition to psychedelic and sludge elements, bringing to mind Pink Floyd and Mastodon. All of these things come together to create a hauntingly lovely affair, communicating a strange mixture of emotions, evoking that sort of contentedly resigned feeling you get when you sit and enjoy a rain storm. It’s not necessarily happy or exciting, but it’s definitely enjoyable, and there were sections so cooly composed and implemented that I did get excited. And they bring in some chugging instrumentation and growly vocals in the latter half of the album.

The first song, “I Saw the End,” introduces Pallbearer’s sound, sets the mood, and presents a musical theme that is repeated throughout the album, really drawing it together as one work without being used too much. “Lie of Survival” is the third song, and it’s one of the best tracks. It’s also the most proggy song, and even a bit of folk rock sees the light, especially in the vocal style. “Dancing In Madness” has the most variety, while “Cruel Road” is my favorite of the chugging, more aggressive songs. “Plea for Understanding” is at first a toned down ending to the album with shimmering, quiet, patient instrumentation until a crescendo of instrumentation gorgeously closes the album out on a perfect note and musically wraps up everything that has come before it. There are seven nicely structured compositions here, and they are also all structured together effectively. The instrumentation, vocals, and lyrics fit together perfectly.

As for cons, this is the sort of minimalistic rock/metal that when, done this well, makes it kind of hard to dig out objective negatives. Either you like Pallbearer’s style or you don’t, and, surprising myself, I did like it. Still, a bit too much of the album does sound similar, though, of course, that’s kind of a thing with doom metal. Also, sometimes some sections of the songs can drag on and/or meander a bit. Beyond that, some people may find a problem with Pallbearer not really changing their sound more than they have, as often it does sound like they are simply improving instead of expanding.

Heartless is certainly an excellent doom album. I’ve listened to it several times in the past few weeks, and that is high praise coming from me. It contains great songwriting and great musicianship, and I think you’ll love it if you like doom metal, prog rock, sludge metal, or the reference points I mentioned. Honestly, these guys could be the next Baroness or Mastodon. At least if they continue just within doom, they will likely remain the leader of the American progressive doom fold. They obviously have a specific vision, and they execute it with skill.

Third time’s a charm! Hopefully their next album will be even better.

I‘m going to give Pallbearer’s Heartless an 83%.