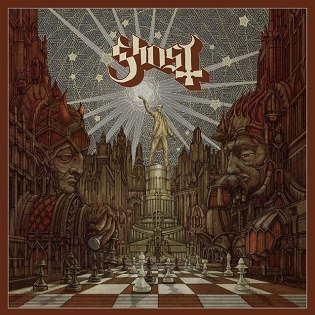 If you’d like some more background on Ghost, check out my Meliora blog here.

After Ghost lit up the metal scene with their award-winning album Meliora, Ghost began work on their second EP, Popestar. When I first heard the EP, I thought I was just listening to the deluxe version of Meliora, which adds five additional tracks to the standard release. It wasn’t until I began digging around for Ghost’s most recent EP that I realized my mistake. If you listen to music much on Spotify, you’ll find Popestar on the deluxe edition of Meliora (tracks 11-15).

My take on Ghost after listening to this EP has been reaffirmed. They possess some of the best instrumentation and creativity in the heavy metal/hard rock scene. Popestar contains what makes Ghost great with the inclusion of keyboards, synthesizers, and even a harmonica. Yeah! What differentiates this EP from Meliora is that it is comprised mostly of covers. With the exception of “Square Hammer”, all the tracks are covers, and they are all done very well. Ghost’s reasoning for not including “Square Hammer” in Meliora was that it didn’t seem to fit with Meliora’s concept. This decision to hold off on the song gave the fans a more complete work in Popestar, along with another radio regular.

Released as a single EP on September 12, 2016, “Square Hammer” is probably the most recognized Ghost song to date, and for good reason. Of all of Ghost’s work, this track is one of the more accessible and radio-friendly that can be found. What really caught my ear was the song’s chorus, and the simple, yet unforgettable guitar riff. The verses aren’t bad at all, but you’ll be humming the chorus for days after listening to this tune.

The vocals aren’t the best coming from Papa Emeritus III, but that’s not what drew me to this song. It was the backup vocals and the well-placed harmonica providing filler for the song’s second verse and throughout that popped. Having heard the original Eurythmics’ version of the song, I prefer Ghost’s. No slight to the original, but Ghost’s takes the ‘80s sound and delivers a more eerie, full version that just oozes that Ghost sound. I will give credit; however, to Eurythmics for developing such a creative sound since they too had backup vocals and an even more prominent harmonica presence than Ghost’s version. I don’t know why I liked the harmonica so much, but that sound just melded so well with the whole psychedelic rock thing Ghost has going on; I just got hooked.

Deviating greatly from their overtly satanic lyrics, Ghost closes Popestar with “Bible.” The story of the song is that of Creation as it goes through the first week in history. While not an entirely accurate representation of the book of Genesis, this Imperiet cover gives us an entirely different perspective on Ghost, and shows that even they can break from their comfort zone. Kudos to them, and the vocal melodies on this song are superb.

Following the successful and influential Meliora, Ghost more than delivers with Popestar. Although I normally wouldn’t give a grade to a cover album, I will for this because I can, and I want to.