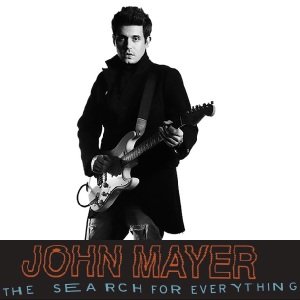 Title: The Search for Everything

So, listen, I haven’t gone crazy or soft on you guys. I have somewhere I’m going with this, I promise!

Many people forget that John Mayer – the erratic, eccentric pop star that he may be – is at his heart a singer-songwriter and guitarist greatly influenced by the blues and that sort of bluesy pop and soft rock that came out of the ’70s and ’80s. When I got started branching off in my teen years from the bluegrass, country, and southern rock music that I generally consumed, one of the genres that I turned to was blues, and John Mayer is part of the reason I did.

See, I had started listening to a fair bit of pop type stuff, some of which I’m ashamed, some of which I’m not. Mayer, Michael Bublé, Ed Sheeran, Bruno Mars, Adele, OneRepublic, etc. I grew tired of most of that pretty soon, yet one thing I noted of John Mayer was his guitar work. Though his songs tend to be a bit too bland and radio friendly, much of it pandering to that vanilla genre, Adult Contemporary, his guitar playing is always good, and that appealed to me as an amateur guitarist. I eventually found Mayer’s blues project, The John Mayer Trio, and their live album Try!. I liked this material far more than Mayer’s other stuff, and my journey into blues began, starting with some of the very musicians that Mayer himself had collaborated with, including Buddy Guy, B.B. King, and Eric Clapton, and then on to other greats like Eric Johnson and especially Stevie Ray Vaughan, now one of my favorite guitarists of all time.

A lot of people who claim better tastes than what pop music has to offer, a lot of people even into bluesy rock type music, disregard John Mayer, and I can’t necessarily blame them. Much of his music is very poppy and featherweight for sure, but there is an obvious talent that Mayer possesses. You can really hear it on that blues project he did. Then there’s also the fact that Slowhand himself has had him at Crossroads, and in one interview, Clapton said he was “gobsmacked” by Mayer’s skill and that “his facilities are phenomenal.” All of those things, plus Mayer’s crazy past and antics (another topic for another time that won’t be on this blog, since we don’t talk about that sort of gossipy nonsense), piqued my interest in his new release this year, and even more so because it features the drummer (Jordan) and bassist (Palladino) from Try!.

On this album, there are definitely some weird moments lyrics, and there’s a lot of the unfortunately usual Mayer blandness, but the guitar work is really good, great in places even. It’s also cool to hear father and son Al and Matt Jardine of Beach Boys fame perform some backing vocals on a song. Some of the more saccharine moments, lyrically, and the lightweight musical stuff, some of it, although I really do admire some of the musical tastes here, were kind of hard for me to get through in points, being almost too sweet at junctures. However, Mayer plays both the electric and acoustic guitar smoothly on this album, and he balances both sounds well.

So this wasn’t my usual review/analysis. More of a discussion really. But since I am talking about the album, I’ll go ahead and grade it, and I’m going to give John Mayer’s The Search for Everything a 70%. Hey, it’s worth a spin, if for Mayer’s Clapton-esque guitar work alone. Plus it’s really good for rainy day listening if you want to be corny or sappy, which I did. Once you finish the album, go ahead and try out that live blues project The John Mayer Trio, because it’s really good, and if you’ve never heard it before, it’s the biggest thing from Mayer that I would personally recommend.

The next ED music review will most likely be metal, so don’t worry if that’s more your thing.