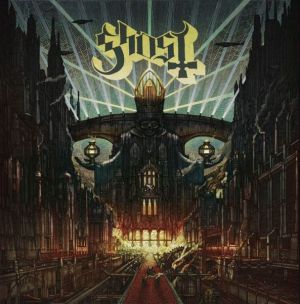 Meliora is Latin for “the pursuit of something better”, so I guess the question is: “did Ghost find something better?” As one of the nameless ghouls described, this album is about life void of God, and catalogues modern men and modern women finding the meaning of life without God. So without His help, what do they do? Being an overtly Satanic group, the album’s message fits the band perfectly. They’ve released albums before with themes such as preparing for the arrival of the devil and being in the presence of the devil and the anti-Christ. These guys are hardly a family-friendly band.

Speaking of the guys, who are they? The names for the group’s members are not publicly disclosed. Rumors are that the members have revealed their identities to close family and friends, but not to the general public. The lead singer is the only one given a name: Papa Emeritus, while the other five members are just referred to as nameless ghouls. For each studio album release, Papa Emeritus has retired while ushering in a newer and younger version of Papa Emeritus. As of now, the band is on Papa Emeritus III. In reality, it’s the same vocalist, but a different approach for sure. As for the other members, they are given a symbol for different elements: Fire, water, wind, earth, and ether.

For a band to be successful, it just can’t be different; it also has to be good. This point has been conceded by some of the band’s members. One of the ghouls has said that they aim to entertain and they don’t expect people to be attracted to them by just their look, but also by their music. I’ll talk about their music in just a bit.

When I was recommended this album, I was told to not research the group, but to just enjoy the music. So guess what, I actually did just that and really enjoyed the music. I put an emphasis on the music because the Satanic lyrics are to me rather cliché and somewhat ignorant. But despite my misgivings with the band’s choice of words, I really appreciated the melodies and creativity found on Meliora. There are indeed some memorable, musical pieces found on this album that I wouldn’t expect from a group called Ghost.

If you’ve never heard the band, the best way I can describe their sound is kind of a psychedelic, pop, hard rock, progressive metal, main-stream flavor with lyrics that you’d expect from Slayer. Clear as mud, right? The music I’ve heard is about as unique a sound as any I’ve heard. Their look is quite unique as well.

For my review of this album, I did indeed study the band and was both impressed and disappointed in how they operate.  Disappointing to me is their cliché approach to death, the occult, and anti-Christian themed lyrics. I can’t help but think: “really?” With the talent these guys have, it’s too bad they don’t take a page from Havok and go political! (Ethan Collin’s Review of Havok’s Conformicide) But I get it, they have found a niche, and are sticking with it, and it has seemed to pay off commercially. What impresses me about them is their clean sound. I really like hearing keyboards in a metal band. It’s not very common, and Ghost uses them well. The guitar riffs are about as good as I’ve heard in any recent album, and with all the ghouls together, their sound is nothing short of complete. Now, let’s discuss Meliora.

“Spirit” gets things started and introduces a futuristic, eerie sound that you’d expect from a science fiction film which feeds into the theme of the album. For “From the Pinnacle to the Pit”, the band’s emphasis on guitar riffs comes into focus and gives us a much more radio-friendly sound that will have you banding your head. This is a fun, riff-heavy song, and I highly recommend cranking up the volume.

From eerie to heavy, Ghost goes epic. The song “Cirice”, earned Ghost a Grammy for heavy metal performance of 2016. The Old English meaning for Cirice is church, and according to one of the ghouls, the literal meaning of the song speaks of certain sects and churches being deceiving and drawing in victims to their cult. The band leaves the interpretation up to the listener, but the deceiving nature of certain beliefs is the song’s focal point. The previous opening of the song, “Devil Church”, was made into its own song by the album’s producer, Klas Ahlund, since the song previously had been 9 minutes long without a chorus. Certainly, the right call was made.

Another excellent decision made by Ahlund was to record the song “He Is” as is. The band was hesitant to release the song on the album Infestissumam, as it didn’t have what they considered the Ghost sound, but after some convincing by Ahlund, the band decided to record it for Meliora. The lyrics are a tribute to Selim Lemouchi, a friend and member of the band The Devil’s Blood, who committed suicide in 2014. The opening song has the sound of a typical worship song, but it isn’t God the lyrics are worshipping. Even in a tribue, Ghost melds the song into their go-to, Satanic theme.

“Absolution” is an interesting song to say the least. It discusses man’s sin nature, and rather than having the view that sin is wrong, it embraces sin and views it positively. Further in, it talks of man striving to earn his way to heaven, but all for nothing since hell possesses every pleasure man wants. This song showcases the ignorance of the band that I previously mentioned and the only redeeming quality this song provides is the captivating music in the chorus. The addition of the piano to the chorus is clever, and certain pieces of the song have a pop sound. I certainly wouldn’t have thought to make a song with this theme upbeat, but “Absolution” delivers.

Meliora offered many surprises to me, and overall I’m impressed with Ghost. Musically speaking, there aren’t many metal bands that I’ve heard more accomplished, and I will definitely be looking to see if they maintain the standard that they have set.