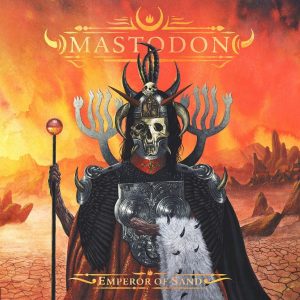 If heavy metal fans felt excited for early 2017 metal releases, like February 25th’s eponymous album from Suicide Silence or March 10th’s Conformicide from Havok, then they were ecstatic for March 31st and Mastodon’s seventh studio album, Emperor of Sand.

Mastodon is a metal beast. Whatever you think of them, you cannot deny their talent, accomplishments, and influence. Three of their albums – Leviathan, Blood Mountain, and Crack the Skye – are bona fide metal classics and majorly influential. If the next generation of metal acts cite one twenty-first century group, that will surely be Mastodon, whose excellently composed musical works have rocked the metal world since their 2002 debut. Their style is hardly definable under any metal subgenre, as they have consistently cultivated a unique blend of prog, sludge, hardcore, stoner, and alternative metal, while remaining unique and ever-changing. Mastodon has often said they want every album to sound different, and that spirit remains on Emperor of Sand.

Once again, Mastodon goes back to their beloved concept album format. This time around, their theme is death, especially as pertains to terminal diseases, like cancer. Cancer is certainly a dangerous subject to approach, but they deal with it tactfully; I have rarely heard such a mature exploration of the psychology of death. Ride the Lightning is the only other metal album I love that specifically deals with such a subject.

The story on Emperor of Sand is masterfully framed and pieced together. In my opinion, Emperor of Sand is Mastodon’s best original story, because it has the most universal topic, and because it has just enough of a fantastical/mythical nature to make it interesting without detracting from the concept and theme explorations. The lyrics do this too. They have both mythological metaphors and understandable statements without losing either and without looking down upon its audience and spoon-feeding us or being pretentious and ambiguous.

The concept channels the band’s thoughts on death and disease into the story of a man who is given a death sentence and wanders out into the desert as he ponders his life, survival, time, and the meaning of it all. The maturity, I believe, comes from the band members’ personal lives in the past few years. Kelliher and Dailor both had mothers who struggled with cancer and chemotherapy, and Sanders’s wife had breast cancer. While the story isn’t as detailed as some people may have been expecting, the story works very well as a structure on which to hang Mastodon’s songs, and though the songs don’t play as a continuous thread, they each do a terrific job furthering the story and concept. Like most Mastodon albums, you’ll get the most out of listening to the album as a whole, but you can also listen to each song by itself.

Throughout the entirety of this album, there is no real lull, and there are no weak points. As for the songs themselves, “Sultan’s Curse” is a great album opener. Though it isn’t as heavy as the album’s majority, it efficiently introduces both the album’s themes and its story, as well as showing a rock, Foo Fighters sort of side to the band. “Show Yourself” comes right after and maintains that more accessible side but also gets us into the heaviness that will follow, and it introduces us to the character’s conflict. “Precious Stones” sees the story’s character seeking a cure, and “Steambreather” communicates a sense of urgency and introduces us to the meatier, more aggressive music. “Roots Remain,” “Word to the Wise,” and “Ancient Kingdom” all get louder as the story gets more serious. “Clandestiny” and “Andromeda” presents the character with a vision, coupling the lyrics with an atmospheric vibe. “Scorpion Breath” has an awesome Slayer meets Dream Theater sound and sets the solemn stage for the end: “Jaguar God,” the last track and a perfect closer for this album. A super high note, this song presents us and the character with the ideas of death and an afterlife. Musically representing everything from the album before it, “Jaguar God” completes the band’s sound and showcases much of what the guys can do. No filler to be found here!

The mix and sound of this album are first-rate. Mastodon and their producer, the prolific Brendan O’Brien, know what they are doing, and they really know how to trim their fat. Even though Emperor of Sand is a concept album, both the songs and the album itself sounds almost perfect in length. In this, Mastodon shows remarkable restraint. They could have easily made this a double album, but they didn’t. It didn’t need to be. Mastodon has full reign by now; they could easily become self-indulgent, like many established artists (I’m looking at you Dream Theater and your Astonishing). But these guys just don’t do that.

The mix is judicious and reasonable, making the instruments and vocals pretty even without losing anything. It creates a rhythmic wall that allows the mammoth to stomp without losing the identity of each instrument and voice. Featured are beautifully layered guitars; instruments meshed together; and a few special effects, keyboards, piano, etc. interwoven with skill. The attention to detail counts, as do the little things, like a tambourine to the side of the mix, or the guitars wonderfully cutting through and across. I do wish the bass were louder, but its placement is probably for the best, laying a subtly muscular foundation.

The band, too, sounds good as ever. We get mid-tempo strength mixed with frenetic guitar and drum work, and behemoth metal heft joined at the hip with riff writing sensibility. Indeed, Mastodon has nearly perfected their balance of aggressive metal, catchy riffs, driving rhythms, and a progressive nature without being overbearing. Their sound is new and evolved, but I would describe it as a mix of Crack the Skye and The Hunter, with helpings of Leviathan. This may sound, at times, like a sampling of what they’ve done in the past, and we get moments that hearken back to past albums. Yet for the majority of the time, it is a harnessing and forwarding of the Mastodon sound. Variety without disconnection.

I enjoyed so many other aspects of Emperor of Sand, but I’ll only mention a few more. For one, no other metal act incorporates three to four lead vocalists like Mastodon does, or at least not as successfully, and that is at its truest now. They even implement their harmonies well, and the vocals all communicate honesty. Like the vocals, the guitars harmonize superbly, and the solos leap out appropriately and organically. The guitars even provide some of the special effects, like at the end of “Roots Remain,” where the guitar sounds like a heart monitor, and that scraping at the beginning of “Jaguar God.” In addition, the lyrics match the music perfectly. And I must mention Dailor’s drumming, because it is outstanding, like a cross between Charlie Benante and Neil Peart. Dailor is simultaneously fluid, precise, spontaneous, and groovy, and he uses cymbals effectively to fill out his sound.

To find things I disliked, I had to get super nitpicky, but we must be honest, and no album is perfect. Though this album finds Hinds’s Ozzy-like vocals – which I have disliked in the past – at their best, his voice does get off track at a few points. Also, I would have liked to see the bass be as in your face and complex as the rest of the music, but it is already played skillfully, and this style may be what was needed. That’s certainly the route these guys have gone on their previous albums. I also just mentioned the drumming, which was amazing, but I did slightly dislike a few of the blast beats on “Ancient Kingdom.” Also, the effects and keyboard on “Clandestiny” were reminiscent of the 1980’s, which was a bit jarring and out of left field, though implemented well. Other than that, some of the song titles are somewhat corny, but that’s about it.

Overall, Emperor of Sand is an excellent record, and it does a great job mixing the heavy aspects of Remission and Leviathan, the proggy aspects of Blood Mountain and Crack the Skye, and the straightforward rock ‘n’ roll sides of The Hunter and Once More ‘Round the Sun. It is a natural part of Mastodon’s evolution, and I loved it. Containing passion, energy, discipline, and technicality, you won’t catch everything upon first listen, but that is fine. I rarely want to listen to an album repeatedly. This is one of the few. Throughout the runtime, I was never bored and always engaged. Though Leviathan reigns supreme as my favorite Mastodon record, I think Emperor of Sand might just be the one I revisit most.

I’m going to give Mastodon’s Emperor of Sand a 94%.