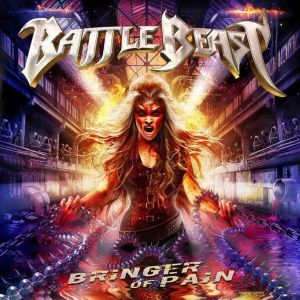 It’s a blast looking forward to new, high profile albums from our favorite, popular bands. Reading all the rumors leading up to their release, hearing the singles trickled out beforehand, all the build up, it’s awesome. At the same time, for me, there are few musical experiences more delightful than discovering some hidden gem, some little indie band that few people no about but are producing great tunes. Maybe that’s too hipster of me, but what can I say.

Battle Beast is one such gem that I uncovered about a year ago. This power metal band hails from Finland, and they are more of the good metal that Europe has been producing lately. I doubt you’ll find anything out there like them right now. Battle Beast’s lead vocalist, Noora Louhimo, belts out soaring high notes like the love child of Ronnie James Dio and Pat Benatar, but what makes these guys really unique is the band behind her. Their music is an interesting and grin inducing blend of 80’s glam metal and current heavy metal, especially European stuff. They first came up on my radar last year, when I watched Rocked’s review of their second album (the first with Louhimo), Battle Beast. That album’s crazy but powerful music intrigued me, and I grew to like that album quite a bit. Check it out!

Now, in 2017, Battle Beast has released their fourth album, Bringer of Pain. Before producing it, they lost one of their main creative bones, the guitarist, backing vocalist, and lead songwriter Anton Kabanen. So I was interested to see how Battle Beast would fare in his absence.

Overall, they’re still firing. Perhaps not on all cylinders, but it’s still full steam ahead. The things that suffer are some of the lyrics and, perhaps, the song selection, which is kind of unfocused and varying in quality, and their creativity occasionally feels a tad stale. However, they maintain their gleeful aggression, and they have made a very good attempt here at balancing their many influences and elements. Sort of revisiting what I said earlier, Battle Beast on this album can be best described as a good 80’s glam metal band backed by mostly modern sounding, double bass drums, like a mix between Europe, Survivor, and Judas Priest, elements of newer bands like Flyleaf, Linkin Park, DragonForce, and Halestorm, and some electronica thrown in for good measure. It’s also operatic at times, as well as containing musical throwbacks to 70’s and 80’s pop. The songwriting is reminiscent of delicious 80’s cheese, bringing to mind bands like Def Leppard and Whitesnake. Silly? Yes. Over the top? Most definitely! But super amusing in the best of ways.

Now that Bjökroth has creative control, we get more streamlined and concise songwriting, a continuation of great instrumentation, a more adventurous spirit, and a hard rock pace and sensibility applied to the overall metal structure. They may miss Kabanen, but I think they’ll do fine without him. The standouts for me are the pounding title track, “Bringer of Pain,” the stellar ballads “King for a Day” and “Beyond the Burning Skies,” the pairing of Louhimo with Tomi Joutsen’s Dramain-like vocals on “Lost In Wars,” the electropop/hard rock marriage “Dancing With the Beast,” “God of War,” which might as well be a Dio cover, and the Guns n’ Roses style “Rock Trash.”

In the end, does the idea of this musical fusion appeal to you? If yes, go give Bringer of Pain a listen. If no, fair enough. I don’t know that you can enjoy it, but I recommend giving them a chance because they are good musicians, and it’s always cool to support some of these lesser known projects. The guys and gal of Battle Beast are doing something awesome: their own music, their own terms. It’s won’t be for everyone, yet for those who embrace it, you will have an awesome time.

I’m going to give Battle Beast’s Bringer of Pain a 78%.

One thought on “Music Review – Battle Beast’s Bringer of Pain”