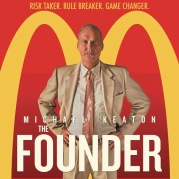 Purchase The Founder via Amazon.

Persistence – nothing in the world can take the place of persistence. Persistence and determination alone are all powerful. Ray Kroc (Michael Keaton) lives by these words. Failing to make ends meet by selling milkshake makers to restaurants while traveling on the road, Ray Kroc persists.

The movie takes off when Ray meets Mac (John Carroll Lynch) and Dick (Nick Offerman) McDonald, brothers who started a little hamburger joint called McDonald’s. Fascinated by their quick and efficient burger-making process, Ray wanted nothing more than for the brothers to franchise. But it wasn’t easy to convince them. The brothers worked hard for their restaurant and didn’t feel comfortable franchising as the quality of service would surely diminish, but Ray was not to be denied his vision. “The new American church, and it ain’t just open on Sundays, boys.” With those words, Ray had the brothers sold, and the franchise began. Mac and Dick were good, honest men, that would give the shirts off their backs to anyone, but it wasn’t their shirts Ray was after.

I’ll not give anything away further from the movie, but I thoroughly enjoyed it. Success stories always interest me, and while not everyone was happy or even successful at the end of the movie, it provided a few lessons and a humorous side note. To start, something I noticed was the name of one of the brothers: Mac. I’m not 100% sure, but I’d say that’s where we get the name for our beloved “Big Mac.” I can’t for the life of me figure out why they wouldn’t use Dick’s name. Moving on, I mentioned this movie taught me a few lessons, and I’d like to share those.

The first lesson I believe that can be gleaned comes from Ray Kroc, and that is to be persistent. I know it sounds cliché, but a lack of intelligence, creativity, or talent can be overcome by persistence, and Ray proves it. He takes another man’s idea and improves upon it by his persistence and determination to be successful.

Lesson two: don’t be like the McDonald’s if you’re after money. Personally, I’d rather be like those men who believed in and loved what they did. They weren’t after money; they were focused on making their business the best it could possibly be. However, in their fervor to do just that, they let Ray Kroc run over them while franchising their beloved company, and when they decided to enforce their contract with him, his response was anything but cordial: “Contracts are like hearts; they’re meant to be broken.”

Finally, don’t lose sight of what’s important in life. The McDonald’s didn’t. Ray Kroc’s wife didn’t. Ray Kroc did. Success was measured in different ways by different people in the story. Ray’s was in money, his wife’s was in the time she spent with him, and the McDonald’s was in their restaurant. Now, Ray Kroc may be portrayed as having success in life and monetarily speaking he did, but at what cost? Watch the movie to find out.

3 thoughts on “Movie Review – The Founder”